Using photography (J.A.J. 1869) and taking plain x-rays are both techniques that were adopted by forensic scientists or forensic pathologists in a flash, as it appears. As far as plain x-rays go, first tests by the German physicist Wilhelm Röntgen were done around November 1885. Not much later, on 25 December 1895 in Montréal, Canada, a male victim suffered a firearm injury to the leg (Cox and Kirkpatrick 1896). Only three days later, the first scientific article was submitted by Wilhelm Röntgen (then in Würzburg, Germany) as a conference contribution, which immediately made headlines. That conference was the third meeting of the Physical-Medical Society in Würzburg, Germany. There Röntgen talked about ”a new kind of rays” on 23 January 1896 (Röntgen 1898). With the goal to show the surgeon that was to remove the bullet of the aforementioned Canadian victim, a plain x-ray was taken on 7 February 1896 in Montréal, Canada. The patient was sent home ten days later. A court trial was held later, and the radiographs were presented as evidence there. Never has a new scientific or technological breakthrough been so quickly, internationally and universally adopted by the medical and scientific community (Brogdon 1998; Thali et al. 2011).

Compared to this bush fire type adoption into forensic science, it is surprising to realise that the first adopters used CT (computed tomography) already in 1973 (Richmond 2004), but that CT remained largely unused throughout forensic sciences and medicine. Some scientific papers described methods as we use them in modern Virtopsy®, such as angiographic methods (Karhunen et al. 1989), CT scanning as such (Wüllenweber et al. 1977; Donchin et al. 1994), photogrammetry or 3D surface documentation (Brüschweiler et al. 1997) and MRI (magnetic resonance imaging)( Woodward et al. 1997). However, by 1998 – 25 years later – not one forensic medicine institute had added post mortem CT scanning or other 3D scanning methods to their everyday workflow.

Immediate adoption of a new technique by the whole wide world is not always the instantaneous result. It has been brought about by incentives every now and then though, such as the myoelectric prosthetic arm, whose wider adoption was some what forced upon the Western Bloc by their nemesis, the Russians. At the time, the technology to build myoelectric arms appeared to have been available, but no one seemed to bother with building products that amputees could use (eg, Schlesinger et al. 1919; Battye et al. 1955). In the middle of the Cold War, to the embarrassment of Western countries (Cohen 1955), out of the blue (or so it appeared), the Russians demonstrated a ready-to-use arm dubbed the 'Russian Arm’ (Kobrinski et al. 1950). After that, the Western Bloc countries, to their chagrin, had to send delegations to Russia to ”learn about it” (Sherman 1964). Interestingly, the wider adoption of post mortem forensic imaging was preceded by a similar incentive: one institute charged ahead and just did it.

The Virtopsy® research was in part initiated by a high-profile case (see Figure B1.1.3, p. 53 in Thali et al. 2009). The first body scans were started by our group in 1999, using project names such as ‘digital autopsy’ or ‘scalpel-free autopsy’. With that, the Virtopsy® project was born (Dirnhofer 2001). This project was not the first attempt to use CT or MRI post mortem scanning worldwide (see references above), but it was undoubtedly the first to incorporate a broad range of technologies such as CT, MRI, biopsies (see Figure 1 overleaf) for an overview of the Virtopsy® system also containing a Virtobot®), 3D surface scanning (see Figure 2 for an example of surface data evaluation and injury matching), while also examining as many cases as possible over an extended period of time and in a systematic manner. A considerable number of traditional forensic pathologists expressed a ‘dislike’ for these new methods, but at the very same time this immediately was news all over the globe. 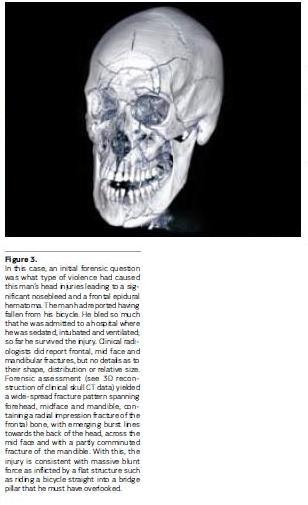 Currently, there are a few centres that offer 3D model testing (such as the Institute of Forensic Medicine in Bern, Switzerland (Thali et al. 2002; Bolliger et al. 2010)) and 3D scanning (centres in Bern and Zürich, Switzerland) (Buck et al. 2007)). Post mortem imaging following the Virtopsy® approach is increasingly being employed around the world. This was apparent already a few years ago (Oesterhelweg and Thali 2009), while in the meantime major implementations seem to be underway at least in the United Kingdom as well as the United States of America (Edwards 2009).

The forensic imaging approach has the following potential:

• Recorded data are observer-independent, archived for later retrieval and can be reviewed by others or subjected to new analytical techniques, and possibilities for teleradiopathology are opened (second opinion).

• Material analysis is possible or approximated (Alkadhi and Leschka 2013).

• Scanning is non-destructive and does not tamper with the forensic evidence.

• Data provide a 1:1 match to the body and correct 3D geometry in xyz-axes or spatial documentation, which can be used as the basis of 3D scientific reconstruction.

• The approach provides an alternative or additional examination that ‘sees’ different aspects of the body, as CT ‘sees’ with x-rays and MRI ‘sees’ chemical distributions (Jackowski et al. 2006).

• The technique could be considered in cultures and situations where autopsy is not tolerated by religion or is rejected by family members (e.g., psychological reasons) (Goodman et al. 2011; Cannie et al. 2012).

• 2D and 3D post-processing are provided for visualisation of the findings, which may be particularly relevant for people not present during the examination.

• A case’s presentation in court may be understood better, more easily and in a more matter-of-fact way (Ampanozi et al. 2012).

• A new strategy option is introduced, specifically, examining a case stepwise. This is achieved by first doing an external inspection, then possibly a CT scan, then reading the data, then possibly an MRI, again evaluating the data, and ultimately deciding whether to do or not do to an autopsy. Thus, cases can be examined in a way that optimises quality and cost.

• Organ colours cannot be visualised (so that, eg, inflammation, tumour, scars, etc. can be hard to discriminate). It is necessary for those interested in the future of forensic imaging to cooperate on an international basis at a high level, exchanging and sharing research results and acquired experience. There is a need for the education and teaching of highly trained professionals, which requires both financial support and enthusiasm. In light of global terrorism, it might be possible for the forensic field to acquire grant-based financing. Government institutions such as the United States Department of Homeland Security are already starting to consider funding research about this topic. As such, financial support seems more possible than in previous years. For that purpose, the International Society of Forensic Radiology and Imaging (www.isfri.org) was founded in 2011. Additionally, in 2012, the Journal of Forensic Radiology and Imaging (www.jofri.net) was born. A new “Forensic Radiology” sub-discipline has opened up, bridging the worlds of Forensics and Radiology.

Because the Virtopsy® multi-tool approach will create a process of change in forensic medicine over the subsequent decades, teaching will be an important and core topic over the next few years. C SI television series have resulted in an increased interest in the forensic sciences (Schweitzer and Saks 2006; Knoblauch 2012). With the adoption of new imaging techniques, forensic sciences have indeed opened up a new area of research and a new area for service options.

The overwhelming majority of people in the UK support the use of... Read more