The Problem With MRI

Magnetic Resonance Imaging (MRI ) is not only one of the most complex parts of the diagnostic chain, it is also one of the most expensive. Obtaining excellent anatomical and functional images is time consuming and requires high levels of technical expertise. Although vendors are attempting to codify workflows, there are numerous factors that lead to increasing heterogeneity in the way images are produced and the time it takes to produce them (table 1). The Affidea MR Excellence programme was developed to address these issues.

An international working group was formed, comprising six clinical radiologists led by an MR Biomedical Engineer with 25 years of experience on MRI protocol optimisation. By consensus, standardised protocols were developed in eight workshops. For each indication and body part it was decided which sequences should be divided into which protocol, dividing them into four categories: i) core sequences, ii) recommended sequences, iii) conditional sequences, and iv) optional sequences. The optimisation part was conducted by a combination of site visits of the MR Applications Consultants and remote access to a Protocol Exchange Platform that was developed to easily transfer optimised protocols to those sites where no site visit was performed. In addition, a Moodle based educational site, the "MRI Academy", was developed in order to provide access to 12 MRI courses.

The Affidea Imaging Metrics (AIM) platform was developed as a web-based system to collect, process, quantify and present metrics retrieved from local ‘agents’ on an interactive dashboard. These agents transmit anonymised metadata derived from the DI COM headers through secure FTP to a central server. These data are compared with a reference database and compliance to standardised protocols calculated. In addition, deviation is defined as the percentage of sequences not included in the standardised protocols. Other key performance indicators include: number of exams, voxel size, examination time, and waste time (figure 1). After a period of monitoring, local teams assess workflows to reduce waste time, using lean methodology and the AIM platform to assess impact (figure 2). The user can setup his/her own alerts and when a specific KPI threshold (set by the user) is violated, an automatic e-mail is sent to the recipients that the user has defined. 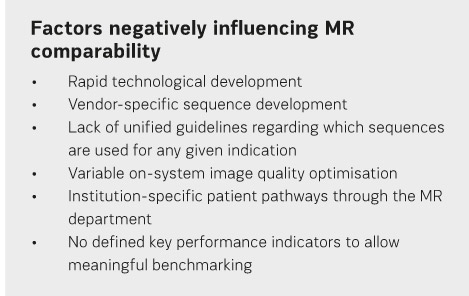 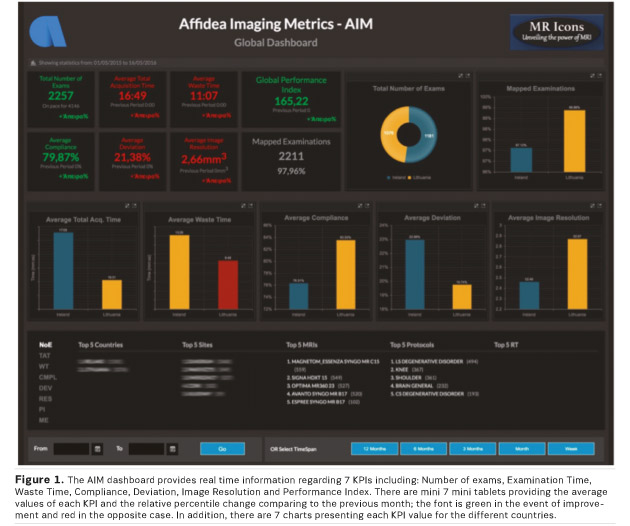 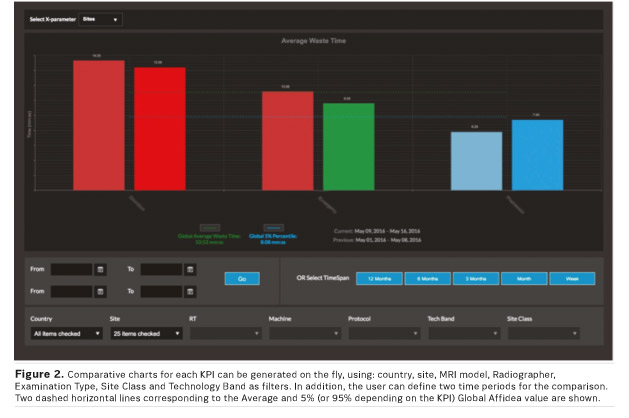 The process of protocol unification has been ongoing for 14 months. So far, 74 standardised protocols have been developed, applied in five European countries at 33 MRI sites. More than 1,500 pulse sequences have been included in the standardised protocols and optimised in eight MRI systems from three different MRI vendors by a group of four MR Applications Consultants. Agents have been installed in 14 MRI departments in three European countries. The KPIs of 18 MRI scanners are currently being monitored in real time. Reduced protocol time has resulted in extra imaging capacity in all three countries, with improvement of objectively measured image quality.

The imaging ‘market’ is fragmented. A handful of vendors are attempting to improve the clinical delivery of imaging services, but this is contingent upon independent institutions, separate from, and in some cases in competition with, their neighbours.

We have successfully implemented a programme across five countries; the project's success so far has been based on the recruitment of experts in the process of unifying and optimising the examination protocols across a range of systems and vendors, development of a fit-for-purpose analytics tool, the appetite and skill set to take on the challenge, and the scale of network in which to operate.

The driving force was the highly motivated stakeholders who realised the benefits and merits of such a project in their daily routine and the impact on the diagnostic services provided. Although a challenging process, protocol unification is necessary to achieve workflow optimisation and therefore improve the quality of service. Although ‘standardisation’ is often considered a dirty word in an era of personalised medicine, the MRI Excellence programme has been constructed in a manner to allow flexibility around clinical indications and technological specifications. A fine balance has been achieved between clinical autonomy and the ability to benchmark effectively.

The Affidea Imaging Metrics Platform has been essential in providing important data regarding the image quality of the conducted exams, the examination time and the amount of variance between studies. However, it is only through coupling this with lean methodology, dedicated implementation teams and with committed clinician engagement, that a holistic programme has been implemented.

Countries around the world have different relationships to advanced ‏diagnostic imaging in the out of hospital (outpatient) environment.... Read more

Affidea is an international healthcare provider focused on advanced diagnostic imaging and cancer care. We are the largest independent... Read more

Education and Training in Affidea – Developing a New Generation of Leaders

Affidea is known for clinical excellence and operational efficiency, but at Healthmanagement.org we are most interested in exploring... Read more