Preclinical Imaging in the Era of Personalised Medicine

Identification of the genetic basis of the therapeutic response obtained in mice models is important for patient stratification in clinical trials. Technological advances in molecular imaging will have a large impact on personalised medicine, and make animal reduction and refinement possible during experimentation 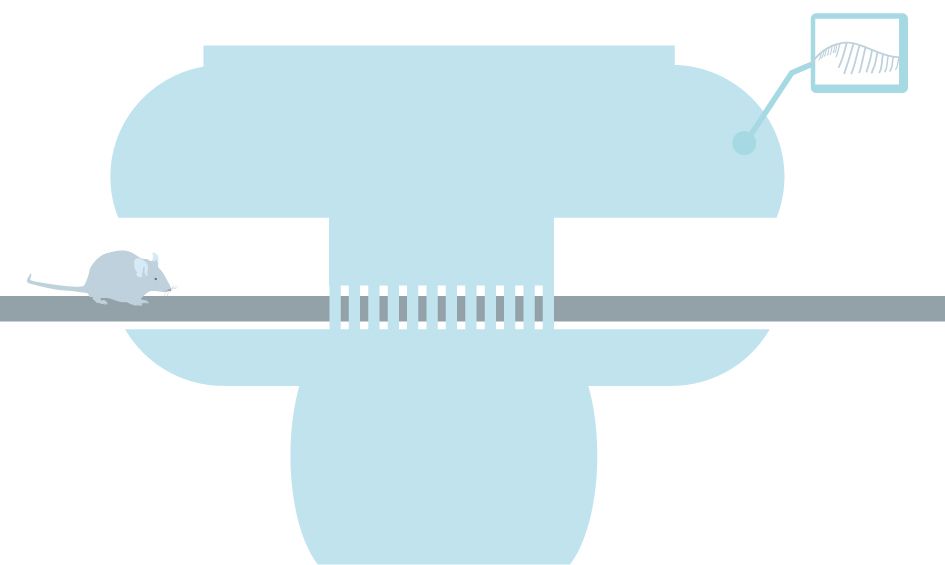 In recent years, many advances have been made in cancer knowledge. In particular, it has been seen that many patients having the same type of cancer display many different molecular patterns. This has introduced the concept of personalised therapy. In this context, mice models of human disease and advanced techniques of preclinical imaging are also undergoing a significant development.

Mice models represent the link between in vitro studies and clinical trials with patients. The mice genome is well characterised and very similar to the human one, sharing approximately eighty-five percent of genes. Furthermore, mice are easy to reproduce, maintain and relatively inexpensive to breed. However, in some cases, mouse models have failed to be predictive (Uhl et al. 2015). For example, mice and other rodent models correctly predicted human toxicity in only fortythree percent of cases in a large comparative study of concordance in the toxicity of pharmaceuticals between humans and animals (Olson et al. 2000). The maximum tolerated dose (MTD ) of drugs in mice is higher than in humans, so when evaluating efficiency of a drug using doses comparable to those administered to human patients, toxicity might go undetected. Moreover, despite successful preclinical testing, only fifteen percent of early clinical trials succeed, and very few drugs are approved for clinical study by the U.S. Food and Drug Administration (FDA) (Uhl et al. 2015). On the other hand, the possibility of translating a model efficiently could be achieved through the use of emerging translational approaches like advanced preclinical molecular techniques.

Having advanced knowledge of the human genome allows the characterisation of a single patient’s genetic defect and hence the classification of subgroups within the same tumour histotypes, improving the chance of survival and a better prognosis. According to that, patients can be divided between those that respond better to certain therapy rather than others. As it is not always easy to perform clinical trials on patients and to have enough patients to recruit, the co-clinical trial performed at the same time in patients and in murine models of the same disease is taking hold as a new reality. Currently, there are two personalised mouse models of oncologic pathology: the genetically engineered mouse models (GEMM) and the patient derived tumour xenograft models (PDX ). These models are now used in most hospitals for the co-clinical trial to guide therapy during an ongoing clinical trial. The GEMM models are used as part of the phase I/II trials in humans for drug development (Nardella et al. 2011; Malanay et al. 2014).

The identification of the genetic basis of therapeutic response obtained in mouse models is important for patient stratification in the clinical trial. In GEMM cancer models, the genetic profile is modified by mutating, deleting or over-expressing one or more genes involved in the transformation process or malignancy. This allows us to study the effect of these genetic alterations over time and to assess the therapeutic response of these tumours for the demonstration of the genetic basis of the disease. One of the advantages of GEMM is that the immune system is intact. Many therapies in cancer patients today are based on the stimulation of the immune system in an effort to make it capable of eradicating the tumour (Huijbers et al. 2015).

An accurate GEMM model mimics human cancer much better both histologically and biologically compared with xenograft models. The structural differences between GEMM and xenografts affect the results of and the response to drug therapy (Gopinathan et al. 2008). In these models, it is possible to study a single stage during the disease progression and to test different drugs at different stages of tumour growth. Mouse models can often be reproduced in more subjects, in whom it is possible to test different pharmaceutical compounds. GEMM models also have several disadvantages: it is usually difficult to drive the extensive genetic alterations as they occur in human cancer. Often GEMM models show heterogeneity in the same cancer type. These facts do not help target therapies. Often, researchers can cure mice tumours, but there is not yet a direct correlation with the response in the human tumour. Furthermore, the development of GEMM models often requires long time periods, and not all mice develop pathological features of the human tumour. The PDX models, also known as mice “avatars” have been recently used as part of several co-clinical trials. They could be very useful when patients are not in a state of health good enough to be enrolled in a clinical trial, or there is no ongoing clinical trial for that pathology. The concept is based on the fact that implanting a patient’s tumour, obtained from a biopsy or from an excised mass, in a mouse, we can study as a specific drug response and develop a personalised therapy. In addition, in GEMM models it is possible to study tumour growth with the correct cell line and in the correct tumour microenvironment interaction. It is possible in this way to predict toxic effects of the drug in the patient or an eventual lack of efficacy. The PDX models are also useful in testing the potential resistance pathways. It is possible to generate different avatar systems from the tumour of a single patient to test different therapeutic approaches at the same time.

Most cancers present a large number of mutations, and there is often more than one potential therapeutic approach for each single patient. The PDX models are useful not only for the identification of drug targets, but also to define prognostic biomarkers of disease or of resistance. After engrafting a tumour in a mouse, the model is propagated through several generations (F0 to F3). Therapeutic agents are usually tested in F3. During the passage though several generations, mouse stromal components could become dominant, so that the loss of the human elements may create limitations in testing therapy.

Preclinical imaging is an emerging field in biomedical research. Noninvasive in vivo imaging offers numerous advantages, such as the possibility to study the same subject over time and the potential application of image-guided therapy. Molecular imaging technologies use molecular probes to visualise biological processes and molecule-receptors interactions in vivo (Figure 1). Due to different sizes of humans and rodents, the performance of clinical imaging devices is not adequate for a reliably precise evaluation in mice and rats. Therefore, dedicated small-animal systems with a higher sensitivity and spatial resolution are required. Many of the traditional clinical medical imaging technologies have been modified for imaging small laboratory animals. Multimodal molecular imaging, ie the combination of different molecular imaging modalities, can radically increase the functional and structural information obtained by each single imaging technique.

The clinical benefits of molecular imaging are immense. There is the possibility of early disease detection and the prediction of treatment response, which will lead to the optimisation of individual patients’ therapies. Molecular imaging is already having a substantial impact on therapeutic decisions made by clinicians. This will be even more obvious as soon as individualised treatment becomes the standard of clinical practice. Another important contribution is in drug development, which typically requires expensive and prolonged preclinical and clinical trials in order to have a new drug approved for human use. Molecular imaging has the ability to noninvasively monitor the pharmacokinetic and pharmacodynamic properties of a candidate drug in a living organism. This can substantially shorten the development phase of drug production for the pharmaceutical industry, by assessing drug effects considerably earlier than by using anatomical and physiologic criteria (Jung et al. 2015). Finally, contrast agents for molecular imaging are also used as tools for drug delivery, especially in the oncologic field, to overcome problems related to therapies, eg chemotherapy and radiotherapy, such as systemic side effects (Greco et al. 2017). 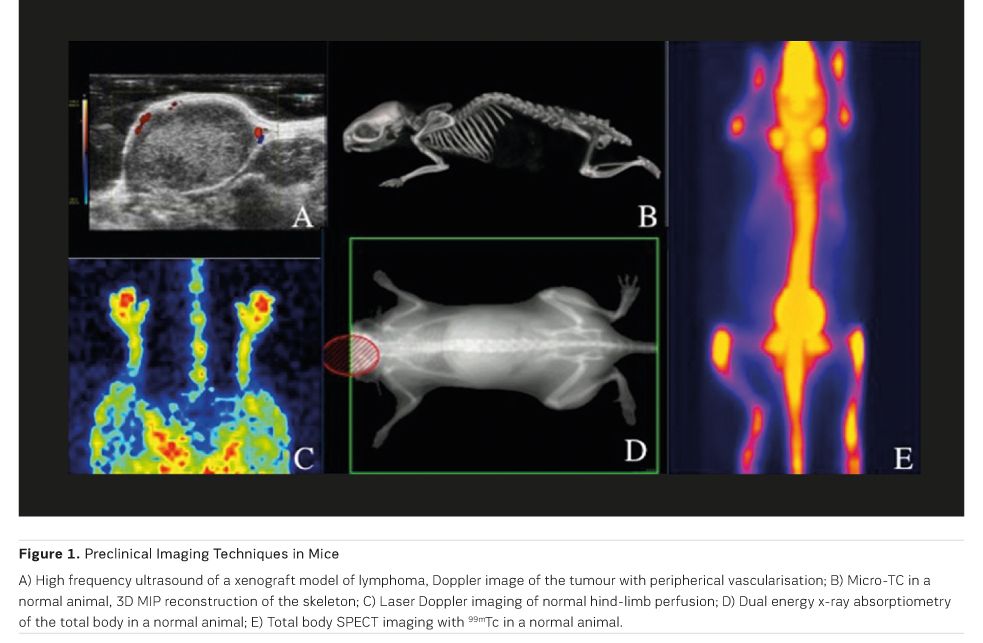 Positron emission tomography (PET ) and single photon emission computed tomography (SPE CT) have been used in the last decades, exploiting the specificity of various probes to acquire functional information both in clinical and preclinical studies. The low spatial resolution of such techniques has logically led to their use in combination with imaging modalities offering better anatomic detail, such as computed tomography (CT) and magnetic resonance (MR). Recently MR imaging has gained much more importance due to its greater soft tissue contrast compared to CT, even if some technical drawbacks have decelerated this research field due to the incompatibility between the conventional PET photomultiplier tubes (PMTs) and MR detectors (Auletta et al 2017). The need for sophisticated methods to obtain satisfactory spatial co-registration presents a significant limitation.

Other imaging modalities that do not require the use of radioactive tracers to study physio-pathological events, eg, fluorescence, bioluminescence and photoacoustic (PA), have been combined with morphological techniques, such as CT, MR and ultrasonography (US). The US approach is probably one of the most used in preclinical imaging. The strengths of the diagnostic and therapeutic US system are numerous:

At the same time, MRI contrast agents are useful to target molecular markers of disease (such as cell surface receptors, enzymes or signalling molecules), but also cells (like stem cells or blood cells). MRI could be useful for early detection of disease, but also this technique has been recently used for target therapies. Nanoparticles for MRI can be designed to perform dual imaging; for example, it is possible to label a fluorescent probe on a magnetic contrast agent nanoparticle, to target a molecular marker of disease and to have enhanced morpho-functional imaging. At the same time the dual targeting can be used for a doubled purpose such as early molecular detection and a therapy against the same molecular marker.

Molecular imaging enables dynamic and quantitative visualisation of specific markers in living organisms. Mice models are important instruments for the study of cancer in human beings. In some cases, eg in toxicological studies, cell-based systems may supplement and perhaps eventually anticipate the use of animals. In many cases, the substitution of whole-animal studies cannot be afforded due to the involvement of multiple tissue and organ systems in both physiological and pathological conditions. Molecular imaging allows animal reduction and refinement during experimentation according to the 3R (Replacement, Reduction and Refinement) principles enunciated by Russell and Burch (1959). The reduction is achievable since preclinical imaging permits longitudinal studies, hence a smaller cohort of animals is needed. Refinement is obtained because imaging is performed under general anaesthesia, and all procedures are noninvasive, allowing fast recovery of mice. In recent years, this new technology has allowed progresses in early diagnosis, monitoring of curative effect and drug development. Molecular imaging has emerged as a powerful novel discipline. Today, one of the most developed research fields operates on the validation of new imaging biomarkers. Preclinical imaging will help clinicians to improve diagnosis, choose the best treatment option and predict patient outcome. Preclinical imaging may be considered a valid and unique tool for the new era of personalised medicine.

Gopinathan A, Tuveson DA (2008) The use of GEM models for experimental cancer therapeutics. Dis

Confident Voices in Health Care Boston, USA Medical improv is an exciting teaching tool that can be used to promote... Read more

Cloud-Based IT Platform for Clinical Trials in Oncology