National Teleradiology System of Turkey: Motivation, Technology, Realisation, and Beyond

Outlines the development of the national teleradiology system of the Ministry of Health of Turkey, and details the motivation behind the solution, technology used, challenges faced, achievements, and future work that will be done.

Within the Turkish Ministry of Health, the national teleradiology system is a patient-centric collaboration platform, which allows data sharing, consulting and communication among professionals. The system interconnects the radiology departments of all 647 public hospitals nationwide.

Turkey has a population of around 80 million. 100 million radiology exams are performed annually. The radiology services provided in the public hospitals are provided free of charge to patients via the social security system. Radiology exams are not only expensive, but they may also be harmful to patients, especially when radiation exposure is involved. Patients failing to convey their radiological data from one hospital to the other can face repetitive exams. Analysis has shown that 7% of the population go through radiological exams in multiple hospitals (Central Data Base of Association of Public Hospitals, Northern Anatolian Region of Istanbul - questioned and accessed March 2014). Furthermore, patient historical data is crucial for diagnosis, especially for chronic diseases.

Radiology services not only involve medical imaging but also reporting by radiologists. As in many other countries, the number of radiologists in Turkey is not increasing proportionally with the expanding population and demand for radiology exams. Furthermore, there is an uneven distribution throughout Turkey of the number of patients per radiologist, which results in varying reporting times and quality of service. For instance, the average reporting time for one hospital can be 2 days while it may be up to 7 days in another hospital, depending on the patient load.

Radiology covers a wide range of imaging technologies and involves all parts of the human body. In some countries radiology is divided into subspecialities such as neuroradiology, paediatric radiology etc. Such specialisation, however, can only be obtained in major public hospitals. For a radiologist working in a small-scale hospital, complex cases such as cancer may require consultation with specific specialists.

From the Ministry’s perspective, the monitoring of radiology departments in terms of performance and quality of service is a major concern. This not only requires the collection of data and tools for analysis, but also review and audit.

The teleradiology system is designed in such a way that it should:

The system consists of the following modules:

For image sharing, the system extends the the Integrating the Healthcare Enterprise Cross-enterprise Document Sharing for Imaging (IH XDS -I.b) topology. A central repository collects the metadata of studies from the Picture Archiving and Communication Systems (PACS) and then registers these records to a central registry using National Identification Numbers as the patient identifier key. In order to enable integration of non-XDS - compliant PA CS systems, a middleware solution, called the Teleradiology Integration Unit (TIU), is used. TIUs are capable of receiving the whole examination data from the PACS systems by using Digital Imaging and Communications in Medicine (DICOM) communication standards and then by providing the metadata to the central repository. The system also collects dose information of computed tomography (CT), x-ray angiography (XA) and digital radiography (DR ) studies for the monitoring and comparison of effective dose levels in hospitals. The topology is shown in Figure 1.

Image access is available via a web viewer hosted in the central servers. Users can query the records through the web interface and then retrieve images directly from the hospital or TIU using state-of-the-art data streaming technology. The central registry allows one-click nationwide access to all of a patient’s radiological information and images. The interface is shown in Figure 2.

A central Radiology Information System (RIS) is provided for teleradiology reporting. This system receives Health Level 7 (HL7) orders from the Health Information Systems (HIS) throughout the country, so work lists can be generated to help radiologists perform reporting tasks. All reports generated in the system are automatically delivered back to the source HIS using HL7 messages. The doctors can use teleconsultation through the system by means of videoconferencing and screen sharing (Figure 3). The system also provides advanced worklist options for image and report auditing. 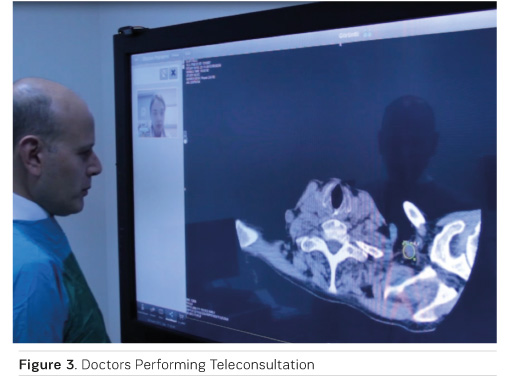 A decision support system is also supplied within the project. This system enables doctors and managers to monitor the real-time data flow, number of registered studies and orders, effective dose levels, slice counts of multislice modalities (magnetic resonance [MR], CT) and average reporting times etc. Information can not only be presented in charts, but it can also be grouped by all levels down to hospital level. A typical dashboard is shown in Figure 4. 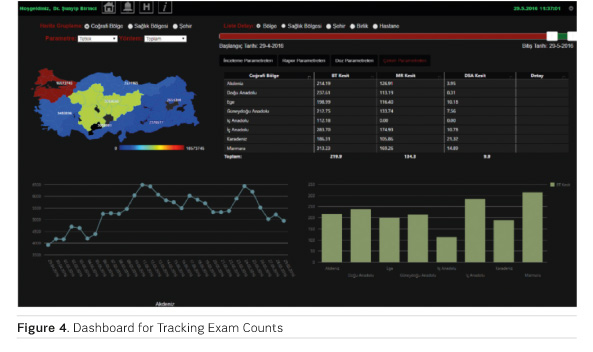 The pilot phase of the project was conducted in Istanbul between 2013 and 2014, which involved the implementation of a central registry enabling sharing of images among 13 public hospitals as well as a central RIS that allowed remote reporting between those hospitals. During this phase, more than 5 million studies were registered and more than 1 million reports were successfully delivered. The nationwide expansion of the project started in late 2014, and in the first six months more than half of the public hospitals nationwide had been connected, so by the end of 2015 coverage had reached 98%. The pilot phase of radiological image quality control started in 13 hospitals in late 2015 and the image quality of more than 1 million studies was examined by radiologists. In 2017, work on the central quality control and management system, through peer review, continues, in association with the Turkish Society of Radiology.

Integration with around 100 different hospital information systems and 40 different PACS systems was a big challenge. Eighty-nine TIUs had to be installed for the integration of all 647 hospitals nationwide. The management of these TIUs requires a lot of hard work. Nevertheless, as more PACS systems implement XDS - I.b-compatible solutions, the number of TI Us required will decrease considerably.

1.2 million individual patients have accessed 3.7 million personal radiology images via the e-Nabız system A radiological reporting service can now be provided to rural hospitals despite a shortage of radiologists. Discrepancies in effective patient dose levels are now revealed and necessary actions can be put in place.

The Ministry of Health is working closely with the Turkish Society of Radiology in defining best practice and standards, and local companies now handle system implementation and maintenance.

Our aim is to increase our research into dose monitoring in order to reduce patients’ exposure to radiation. The historical dose information of patients will be available to ordering physicians as part of the system to check imaging order appropriateness, which is currently in the pilot phase.

We are expanding the image quality review coverage in order to standardise medical imaging services throughout the country. This will ease the radiologists' reporting tasks by enabling the same quality of images from different hospitals.

We are utilising NoSQL database engines to enable big data analysis and research in the future.

We are developing structured reporting templates in conjunction with the Turkish Society of Radiology, which will enable the delivery of standard reports, regardless of the reading radiologist.

Automatic translation of these reports into any language will also be available, and we are currently investigating deep learning techniques for automatic analysis of images for diseases such as lung cancer.

Connecting imaging and information in the era of AI

The effects of COVID-19 have been manifold but one of the areas which has seen destabilising implications is the training... Read more

Crossing the Rubicon to a Digitally Enabled Medical Care

The COVID-19 pandemic has become a catalyst for healthcare to embrace digital care. Affidea Group is already on this path and... Read more

A clinical trial was conducted to evaluate the effect of a single high... Read more

A recent report evaluates the characteristics and outcomes among cardiac... Read more