Muller and her colleagues used shear wave elastography (SWE) to take measurements of 157 pregnant women who were already scheduled for ultrasounds. The researchers found that patients between 24 and 35 weeks pregnant who had below average cervical stiffness were at higher risk of going into preterm labour.

In SWE, stiffness is measured based on how fast a mechanical shear wave propagates through the tissue. The researchers found that if the wave was more than one metre per second below the baseline for a woman’s gestational age, or how far along she is in her pregnancy, the woman was more likely to have a preterm birth.

Muller explained that the main advantage is that this technique potentially provides some information on the mechanical competence of the cervix, which is key for the prediction of preterm labour. Unlike other methods, SWE doesn’t rely on arbitrary pressure applied by the operator, no additional set-u p is needed and it can be performed during a routine medical examination. Their study showed interoperator reproducibility. Muller also notes that although the SWE technique uses high-end ultrasound equipment the equipment can be used for normal prenatal examinations as well as SWE assessments of cervical stiffness, which would mitigate additional costs. Now the concept has been proved to be feasible, the next step is a longitudinal study to follow patients through their pregnancy, to allow researchers to understand how cervical stiffness changes and what changes may indicate early onset labour.

The research team have also conducted an animal study, which allowed the searchers to induce cervical ripening in a controlled fashion, and to subsequently observe the cervix using histopathology and other optical techniques

Ultrasound Fade Could Be Early Detector of Preterm -Birth Risk

Researchers from the University of Illinois at Chicago (UIC) College of Nursing have published a study on ultrasonic attentuation, showing that it could indicate risk of premature birth. Barbara McFarlin, associate professor and head of women, child and family health science, and colleagues, predicted that an ultrasound exam would detect changes in water absorption and collagen makeup as the cervix remodels, offering a noninvasive way of measuring changes in the cervix that occur prior to delivery. 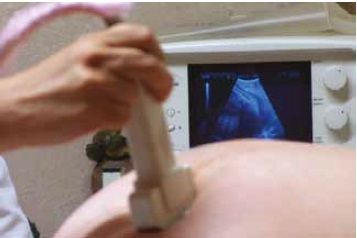 Current methods to predict risk of preterm delivery rely on measuring the length of a woman’s cervix. McFarlin explained in a statement that cervical length assessment is of limited use, as most women with a short cervix deliver at full term.

In their study, published in Ultrasound in Medicine and Biology, almost 240 ultrasounds were performed on 67 African American women to examine cervical length and signal attenuation during the ultrasound exam. The analyses focused on the early gestational periods — from 17 to 21 weeks, and from 22 to 26 weeks.

None of the women had a cervical length of less than 2.5 centimetres — the most commonly used cut-off to identify women at risk for premature birth who are candidates for progesterone therapy before 27 weeks of pregnancy.

“As the cervix changes from a firm to a supple, soft structure, estimates of attenuation from an ultrasound can provide clinicians with early tissuebased information, rather than waiting for symptoms of preterm birth,” McFarlin said. “In the future, this can be a feature added to clinical ultrasound systems.”.

Flexible needles are ideal to reach their target in tissue, having sub-millimetre level accuracy. A doctoral student at the University of Twente has devised a robotically steered system which uses ultrasound tracking to guide the needle. 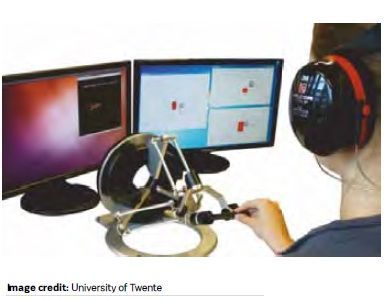 The system uses flexible needles with an asymmetric tip, which bend naturally when inserted into tissue. By performing a sequence of insertions and rotations, one can steer the needle in complex three-dimensional paths. The needle is controlled by a robot and tracked in real time using ultrasound images. This ensures that is possible to adjust the needle’s path and guide it through tissue with sub-millimetre level accuracy. Momen Abayazid’s doctoral research involved the development of the robotic test-bed and the control that guides the needle as well as the 3D needle localisation algorithm using ultrasound images.

Abayazid has also developed a system that allows the clinician to have control. In this version the clinician inserts the needle, while being given guidance and cues by the robotic system with the help of vibrations and visual feedback. This could enable needle guidance from a clinician in a different location to t he patients.

This system has been integrated with an ultrasound-based, automated breast volume scanner (ABVS). By combining the proposed system with a robotic, clinically approved ABVS system it is possible to bring robotic needle guidance from the research lab to the operating room.

According to thesis supervisor Prof. Dr. Sarthak Misra, Abayazid’s research shows that the system is technically ready for application in humans, and he expects the first clinical trials to begin in three to four years. Mr. Abayazid performed his research at the Surgical Robotics Laboratory, which is part of the Department of Biomechanical Engineering of the UT research institute MIRA.

Quality and Safety in Radiology: A Symbiotic Relationship

Political Background Safety and quality have been highlighted by the European Commission’s Directorate-General for Health... Read more

Regina Holliday and the Walking Gallery

Patient Activism, Patient Advocacy or Patient Engagement. Whatever label you give it, one thing is for certain: the movement... Read more