Adverse Effects of Iodinated Contrast Media and Their Management

Adverse effects from the administration of iodinated intravenous contrast media vary from mild reactions to rare but severe life-threatening situations.

Contrast-induced acute kidney injury (CI-AKI) has replaced other terminology such as contrast nephrotoxicity, contrastinduced nephropathy (CIN) or radiocontrast nephropathy (RCN). CI-AKI is the third leading cause of hospital-acquired acute renal failure (Kagan 2010). It is an iatrogenic disease, which may cause long term morbidity or death. CI-AKI is defined when one of the following criteria is met:
These variable definitions make it difficult to predict the long-term clinical outcome of CI-AKI. CI-AKI is both an adverse effect that may permanently impair renal function, increase the length of hospital stay and hospital costs as well as a predictor of future adverse cardiovascular events and mortality (RCR 2015; Richenberg 2012).

Acute reactions are those which take place within 60 minutes of the administration of iodinated contrast media. The majority of acute reactions are anaphylactoid, are not dose-dependent, and involve the release of histamine along with other active biological chemicals. Acute reactions may be classified as mild, moderate and severe (RCR 2015):

Delayed reactions, which account for less than four percent of reactions, take place between one hour to one week after the administration of iodinated contrast media. Delayed reactions most commonly present as skin reactions with a maculopapular rash. Less frequent skin reactions include angioedema, urticaria and erythema (RCR 2015; ACR 2013; RANZCR 2009; Bettmann 2004).Table 1 presents the types of iodinated contrast media reactions and suggested patient management. 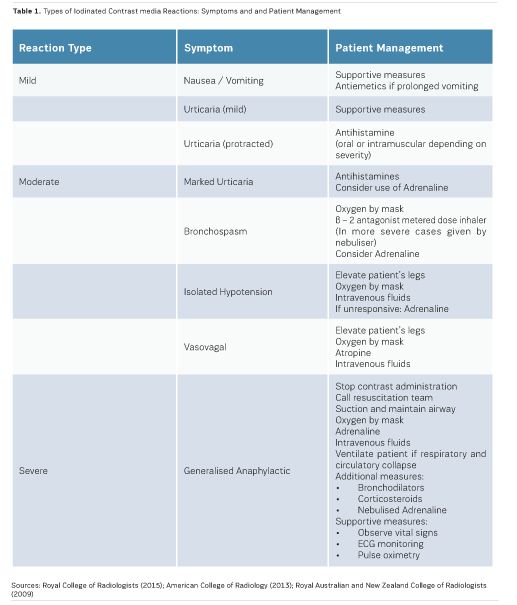 True CI-AKI is defined when there is a permanent reduction in renal function as opposed to a temporary alteration of renal function post iodinated contrast medium administration. True CI-AKI is rare and usually confined to individuals with pre-existing renal dysfunction. The risk of CI-AKI is 0.6% to 2.6% in the general population, but rises to 4.7% in patients with pre-existing renal impairment. Renal impairment, measured best by estimated glomerular filtration rate (egFR), is the only risk factor predictive of CI-AKI. Patients who have a high risk for CI-AKI need to be identified prior to iodinated contrast media administration through measurements of egFR. Renal impairment is considered in patients with an egFR <60ml/mim/1.73m2. However, the Contrast Media Safety Committee of the European Society of Urogenital Radiology, in their updated guidelines, agreed that the risk of CI-AKI is lower after intravenous than after intra-arterial administration of contrast media. They considered that only patients with an egFR of <45ml/min/1.73m2 are at risk from CI-AKI after intravenous administration. Other risk factors, such as age over 75 years, diabetes, metformin use, congestive heart failure, gout and collagen vascular disease should also be considered (Richenberg 2012; Stacul 2011).
To reduce the risk of CI-AKI, egFR measurements should be available for all nonemergency cases. An egFR within the previous three months is satisfactory for patients in a stable condition. Patients with known renal disease should have an egFR measurement from the previous seven days, which can be compared against a baseline. In the presence of chronic kidney disease (egFR<40ml/ min/1.73m2), one should consider temporarily stopping angiotensin-converting enzyme (ACE) inhibitors and angiotensin II receptor blockers. Consultation with a nephrologist has been shown to be beneficial for patients at risk of CI-AKI (RCR 2015; Lewington, 2013). (See Table 2 for stages of chronic kidney disease). 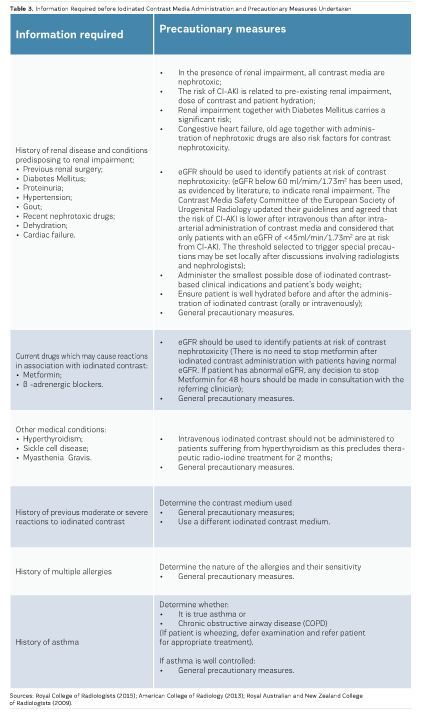 If iodinated contrast administration is necessary during pregnancy, there is a small risk of thyroid suppression to the fetus, and therefore a thyroid function test should be performed during the first week after birth (Royal College of Radiologists 2015).
A small percentage of iodinated contrast is passed on to breast milk in lactating mothers. However, no specific precaution is necessary and mothers may continue to breastfeed their infants without any significant risk (Royal College of Radiologists 2015).
Preparation for the treatment of iodinated contrast media reactions must include preparation for the whole variety of possible reactions and include availability of appropriately trained personnel, medications and equipment (RANZCR 2009)

Medical care in the Netherlands is organised through a gatekeeper, the general practitioner (GP). Originally, the GP would take... Read more

"We shape our tools, and thereafter our tools shape us” (McLuhan) Wasteful, unhelpful imaging helps nobody, and may be associated... Read more