How Comics Play a Role in Medicine

Jorge Muniz is an internal medicine physician assistant, illustrator, and author of Medcomic: The Most Entertaining Way to Study Medicine.

Tell us a little bit about your background. How did you get into illustrating and then connect that to medicine?

Although a career in the arts was something I thought about, when I started college I decided to study science. I obtained a Bachelor’s degree in biology at George Mason University in Fairfax, Virginia. This eventually led me to pursue my Master’s degree at Nova Southeastern University in Orlando, Florida to become a Physician Assistant (PA). Once I entered the world of medicine, I realised that I had finally found a theme to fuel my passion for cartooning. Even better, I was creating artwork that helped my colleagues learn medicine in a unique way.

What is the story behind Medcomic?

I’ve enjoyed drawing since I was a little kid. Some of my earliest memories are drawing sketches of clowns with my grandmother in Puerto Rico. In middle school and high school I was a bit of a technology nerd and played a lot of video games. By the time I was a freshman in college, my passion for art and technology led me to develop a strong interest in digital artwork. It was around that time that I decided I would publish some sort of online webcomic. I tried a few different ideas for a comic strip with my college roommates, but unfortunately they didn’t stick.

The first official illustration for Medcomic was unlike the current educational cartoons I make. It began as a comic strip I drew when I was on a paediatric rotation in my second year of PA school. I was frustrated at how similar the names of certain diseases were, which made it harder to distinguish between them. I pictured a couple of evil doctors in an ancient castle, plotting against students by giving confusing names to newly-discovered diseases.

What has the response been to Medcomic? I understand medical schools are using it in courses.

The positive response has motivated me to continue the project and draw every day. Professors are currently incorporating the illustrations into their lectures and Medcomic books are being used as a fun way to supplement the curriculum.

Do you have any personal feedback from students?

Students send me topic requests every day and I try to keep track of the more popular requests for future artwork. I also get feedback from undergraduate students. One student wrote to me saying that they were writing a research paper for a freshman composition course and was considering writing about Medcomic and the potential of webcomics in higher education. It was very interesting to hear that sort of interest in the Medcomic concept.

The illustrations really tell a story. Where do you get your ideas from and how do you tackle a drawing once you have decided on a subject?

After choosing a topic, I take a piece of paper, fold it in half, and start sketching the first thing that comes to my head. Once that rough sketch is made, I start working on the actual cartoon on my digital tablet. Usually what happens is that I think of an additional idea as I’m drawing and add it to the illustration. The cartoon tends to evolve as I draw based on how it starts to come to life on the canvas. The final illustration will usually look very different compared to the initial sketch.

Does Medcomic provide you with an outlet for the side of your personality that enjoys stand up comedy?

I’m a big fan of standup comedy and one of my favourite birthday gifts was when a group of my friends took me out to a local comedy club. It’s a lot of fun. I like to think that every illustration has a little bit of my personality somewhere in there. 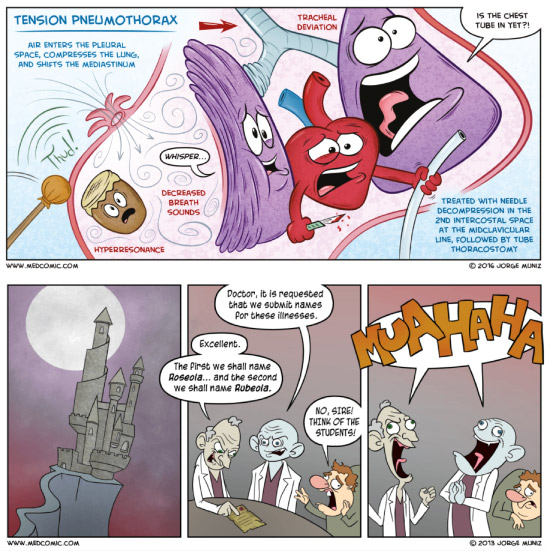 Do you have to tread carefully with combining humor and medicine? How do you do this?

It is important to me that each illustration serves the dual purpose of educating and entertaining. If the image is offensive or too crude I feel that it fails in one or both of those categories. A bit of shock value is good because the goal is for students to remember the drawing for their exams. In the end it can be difficult to maintain the balance because I am drawing cartoons about disease processes, but I try my best for the illustrations to be tasteful.

What is your connection to the medical field?

After obtaining my Master’s in Medical Sciences and becoming a PA, I worked in the field of orthopaedic surgery at Florida Hospital, Orlando. As the PA on-call, my responsibilities included assessing and treating orthopaedic trauma in the emergency department, performing reductions for fractures and dislocations, joint aspirations, and various other procedures. After two years in orthopaedics, I transitioned to treating patients in the field of internal medicine. I’m enjoying spending time with my patients explaining how we’re going to treat their illnesses and educating them on how to make positive changes to their lifestyles.

How did the crowd funding campaign go for Medcomic?

The book, “Medcomic: The Most Entertaining Way to Study Medicine”, was funded through Kickstarter and published in November 2015. It was a dream come true to be able to collect the artwork I had made up to that point and create an official volume. The Kickstarter was somewhat stressful to prepare for, but fortunately I had a lot of support and surpassed the funding goal within the 30-day window.

If there was something you could change about medical training, what would it be?

Students should be kept up to date with new trends in technology so that they’re better prepared for the future of medicine. There could be more discussion on medical innovations going on with phone apps, diagnostic tools, and robotics that may not be found in traditional textbooks.

Right now your focus is on clinical matters. Do you ever think you'll prepare a textbook on healthcare management matters such as IT which is taking over and has a range of pros and cons?

There is certainly a lot of potential to grow the Medcomic concept in the future in new and interesting ways. The cartoons can be a vessel to provide commentary on key issues in healthcare such as IT . I’m also interested in creating materials for patient education. I’m excited to explore these possibilities in the future. I plan on continuing to produce artwork that brings a new perspective to important medical topics. The blog at Medcomic.com is a great platform for me to share new illustrations on a weekly basis. I’d like to eventually publish a second volume with comics from the blog and new cartoons made just for the book.

Utility of artificial intelligence in cardiology

A step forward for daily practice. Artificial Intelligence (AI) tools are proving their utility in the evolving field of... Read more

Is the “Smart Hospital” a chance for change? Prof. Heinemann explains how futuristic and smart technologies that are used... Read more