KLAS Research interviewed healthcare providers about three front-end systems, and has published its report Front-End Speech: What are the Value- Adds? by Boyd Stewart and Austin Cameron. KLAS spoke with 88 organisations. Of these, 20 were live with Dolbey Fusion SpeechEMR (EMR), 33 were live with M*Modal Fluency Direct (EMR), and 35 were live with Nuance Dragon Medical 360 NE (EMR). The report discusses the key performance differences between the Dolbey, M*Modal and Nuance front-end speech (FES) solutions and looks at why healthcare providers chose these vendors. At the time of publication of this report, M*Modal was the only solution based in the cloud. Nuance’s solution was not yet live.

As FES takes longer to learn than most other processes, clinicians may be reluctant to take the time to train in their use. Each vendor in the report scored 7.7 for ease of use. Healthcare providers cited some usability issues for each vendor:

Dolbey users praise its stellar partnership and hand-holding. Most find the product easy to use with a reasonable learning curve. Some complained of poor interfacing to the electronic medical record or lack of intuitiveness. M*Modal users find the cloud-based solution easy to work with, and many feel M*Modal is functionally t he strongest solution around. Most users need only a short time to train up. However, some have had issues with report accuracy. In addition the cloudbased functionality means that adoption and training is not simple for all users.

Nuance users are attracted to use this solution, because it has been around for a while. Once they have been trained, many doctors find it easy to use. Some users complain that Dragon does not remember words it has been trained to recognise, and others feel that they do not receive sufficient training or support.

Nuance has dominant market share currently, and has strong relationships with vendors, including Cerner. Healthcare providers tend to consider Nuance when looking at purchasing or replacing a FES system. Dolbey and M*Modal have lower mindshare than Nuance. Nuance has the reputation of reliable and advanced technology and is perceived as the low-risk option.

M*Modal’s cloud offering has comparatively low upfront and maintenance costs, easier scalability and a short learning curve. Several Dolbey clients included in the report noted that they had achieved significant return on investment (ROI) from a dramatic reduction in transcription costs. Nuance is seen as the most expensive solution; most users are willing to pay a higher price because they see value from the solution. Several Nuance clients noted their disappointment at extra cost incurred due to unexpected upgrades and from longer than expected implementation and functionality delivery.

Dolbey has continued to deliver a quality product and service to new client s amid significant growth. Many Dolbey users praised Dolbey’s client support from implementation onwards. M*Modal’s account support is praised by several clients. While many Nuance clients are satisfied with the product, some were frustrated by lack of follow-up when addressing challenges (see Figure 2). 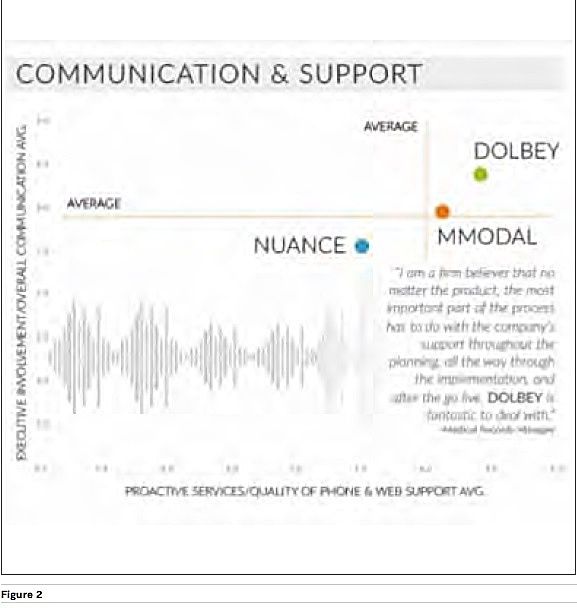 KLAS works with over 30,000 people in 5,000 hospitals and nearly 3,000 ambulatory organisations. K L A S sources its information predominantly from the United States. KLAS data and reports represent the combined opinions of actual people from provider organizations comparing how their vendors, products, and/or services performed when measured against participants’ objectives and expectations.

KLAS findings are a unique compilation of candid opinions and are real measurements representing those individuals interviewed.

Regina Holliday and the Walking Gallery

Patient Activism, Patient Advocacy or Patient Engagement. Whatever label you give it, one thing is for certain: the movement... Read more

Nothing about me without me An empowered activated patient: Understands their health condition and its... Read more

Which vendors provide best value? Speech recognition systems for physicians to use to dictate letters and reports promise increased efficiency and reduced...