Day of Solidarity to Prevent Suicide

On April 23, 2015, we lost Kevin Dietl to suicide just weeks before he was to graduate medical school. Kevin's parents were so excited to attend their son's graduation. Instead, they attended his funeral. On May 10, 2016 we lost another bright, young soul to suicide. Sean Petro was in his third year at the USC Keck School of Medicine. His suicide is the third such tragedy at his school in the last two years.

Medical student and physician suicide is an epidemic. The American Foundation for Suicide Prevention estimates that 400 doctors die by suicide in the United States each year (American Foundation for Suicide Prevention, 2016). That’s the equivalent of an entire medical school. Suicide is the second leading cause of death among medical students, yet no medical organisation appears to be tracking these suicides or taking concrete steps to prevent them.

Why is this? How can we solve a problem when it is hidden from us? What's being done to prevent the next suicide? How many more students must die before this issue is addressed?

The AAMC (Association of American Medical Colleges) and ACGME (Accreditation Council for Graduate Medical Education) claim to improve the healthcare of all through serving the academic medicine community and advancing the quality of physician education. Yet, how can this be achieved while ignoring our own epidemic of medical student and physician suicide?

The fact is, studies show that medical students enter medicine with our mental health on par with or better than our peers. Those of us who have gone through the training know that public humiliation, bullying, and sleep deprivation are commonplace in medical training. Those who seek help often risk punishment by their programmes and even loss of their careers. It is shameful that mental health is stigmatized within the medical profession and it really is to the detriment of all.

As physicians who are dedicated to caring for the physical and mental health of others, we are appalled at the level of inaction among our own physician advocacy organizations when it comes to caring for physicians and medical students. This is the reason that I and Dr. Pamela Wible started a petition to urge the AA MC and ACGME to track medical student and physician suicides, to enact policy requiring medical training programmes to take concrete actions to combat the culture of abuse and to offer routine and confidential on-the job psychological support to all medical students and physicians. Further information about the Care2 petition and the campaign to prevent physician and medical student suicide is available at: care2.com/savedoctors 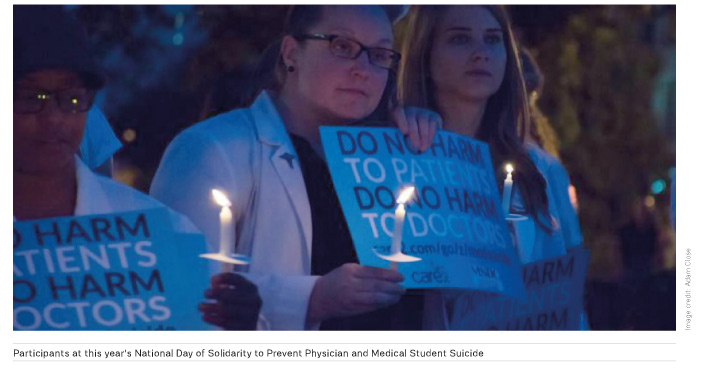 More than 75,000 people globally have signed this petition demanding action. With the petition as inspiration, Care2 sponsored a National Day of Solidarity to Prevent Physician and Medical Student Suicide on August 20th, 2016. This day was chosen because it worked well for medical student and resident schedules. The event took place in 11 cities across the U.S. in order to show solidarity with those medical students and physicians who lost their lives to suicide. Over 600 people attended the events nationwide. It was a transformative event for those in attendance and we hope that it will grow yearly.

The programme for the Day of Solidarity was uniform across the different event locations. Each started with speakers from the medical community sharing their experiences and observations with depression and suicide, then opened the floor in an open-mic session for attendees to speak, showed a clip from the "Do No Harm" documentary, a short film about this hidden epidemic, and ended with a candlelight vigil to pay tribute to those who have lost their lives.

Our hope is that by sharing our stories we, as a collective, can move towards healing and, in doing so, bring awareness to this life-threatening issue facing physicians and medical students. We believe that it is only from within that we can change the course of medical culture and healthcare in the world.

Depression, bipolar disorder and alcohol and substance abuse are key factors in medical suicides. Physician suicide completion rates are partly attributed to medics’ knowledge of drug lethality (American Foundation for Suicide Prevention, 2016). Student BMJ says one in seven medical students has considered suicide during their studies. One in three has experienced mental health issues while 80 percent of 1, 000 surveyed said help for mental health problems at university was poor (Cooper, 2015).

Programme Chair, Cybersecurity Technology ,UMUC, Author “Do not view your employees as expenses. Treat them like the assets... Read more

Patients' Rights Have No Borders

Seeking Healthcare in Another Member State   The diversity of health systems, especially in terms of quality and safety... Read more