Kate Parkes, Radiology Clinical Systems Manager at Birmingham’s Children’s Hospital, explains how its installation of Agfa HealthCare’s ICIS View is the latest step on its path to the ultimate goal of having every image and report on one service 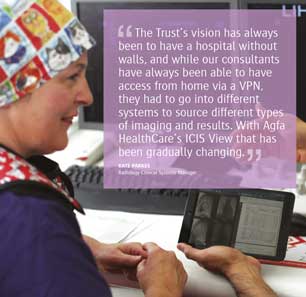 Developing a hospital without walls

“The Trust’s vision has always been to have a hospital without walls, and while our consultants have always been able to have access from home via a VPN, they had to go into different systems to source different types of imaging and results. With Agfa HealthCare’s ICIS View that has been gradually changing.”

Images can be seen anywhere in the hospital

“ICIS View was being launched at around the time that we were looking to install a solution that would allow us to show our really large laparoscopic videos without impacting on the performance of the Trust’s intranet as well. In addition, for studies such as endoscopy and laparoscopy, historically a lot of the information was stored on DVDs and it was often diffi cult to fi nd the disc to review as there was no central store. There was a similar issue with ECG and pacemakers information; the reports were fi led in the patients’ records or in a folder in the cardiac unit. Now they can be seen anywhere around the hospital. ”

Access to ICIS View has also had a fundamental impact on planning patient care says Kate Parkes. “It makes sure that when a child is seen by a multidisciplinary team (MDT), often with many specialties present, or when they are being discussed at the MDT meetings – which can often be as important as seeing the child – it is so much easier to flow all of the information through one service rather than having to keep switching between different systems.” 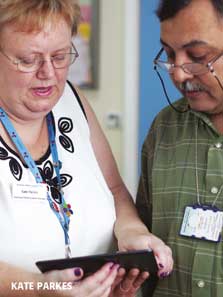 ICIS View also makes interaction with the patients and their parents easier through its use of tablets. “We are rolling out ICIS View on Apple iPad mobile digital devices at the moment, and although this is still quite new it is definitely proving popular with the kids,” says Kate Parkes. “Children are very visual and they like looking at images on an iPad as it is familiar to them. If they can see something, then they can understand it, and children like to look at their images and see exactly what is what. They don’t have the fear that adults do and they are very inquisitive generally.

“Also, it is a little bit more private than having it on a computer in the middle of the ward. The iPad can be taken to the bedside and while some parents obviously don’t want to see, anything that can help the child understand and be comfortable helps the parents. They can physically see changes and see improvements – or occasionally not – and it is all in real time. So, for instance, in the renal clinic or the liver clinic, they have their ultrasound and then they go back to clinic and get their results there and then. It means children don’t have to come back for reports and follow up appointments and so saves time.”

As with any implementation of new technology, “there is a learning curve and often when you are the fi rst to do something, there are teething problems,” admits Kate Parkes. “But, you also reap the benefits, especially if, as in our case, you have been involved in the Beta testing. We have had a say in how it looks, how it feels and how it works. And, as far as I know, we are the only site in the world that is running ClinApps*, a 3D software, on ICIS View and that has gone down really well with the clinicians here.

Our goal is all images and results from one source

“Our aim for our fi ve-year plan is to pull all of our images into one source and then, following that, the results. We are still working with departments that haven’t worked with PACS before because they have never been required to – departments such as opthalmology and the respiratory department. It has been a huge learning curve as the departments have to follow very strict workflow and in some cases, like the heart investigation unit, they have had to change their entire workflow and how they interact. But our staff is very supportive of the changes and PUG, our PACS user group, enables them to make requests for developing additional functionality. We have pretty much developed PACS as far as we can without a vendor neutral archive but, hopefully, that is on the horizon as we have a bid into Government for funding to help make that happen. I am confident that when we are ready, the solution will be there.”