The world heart federation’s commitment: 25% by the year 2025

Cardiovascular disease (CVD), including heart disease and stroke, is the leading cause of death around the world, most surpris- ingly in low and middle-income coun- tries. CVD alone causes one in three deaths globally, claiming over 17 million lives a year (World Health Organisation, 2015). Yet non-communicable diseases (NCDs) receive less than one per cent of Development Assistance for Health (DAH) funding.

In some cases cardiovascular disease can be prevented by addressing risk factors such as tobacco use, obesity, physical inactivity, high blood pressure, and diabetes. Prevention does work: over the last two decades, deaths due to CVD have declined in high-income countries, due to a combination of prevention and control measures (Mendis et al. 2011), such as tobacco control and promotion of heart-healthy treatment regimes, diet and physical activity. World Heart Day is celebrated every year on 29 September to keep cardiovascular health in people’s minds and to raise awareness of what can be done to promote and advance it. 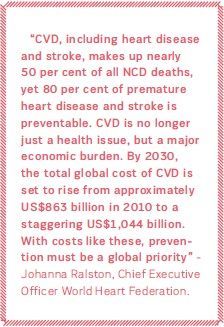 Secondary cardiovascular prevention can be defined as any action aimed at reducing the probability that a heart attack or stroke will occur in patients with known risk factors, such as hardening of the arteries or high blood pres- sure. Successful secondary prevention of CVD can have a major impact on morbidity and mortality, as well as reducing the economic burden on countries. Interventions include pharmacological treatments (eg aspirin, lipidlowering drugs, beta-blockers, and/or angiotensin converting  enzyme  (ACE) inhibitors), lifestyle modifications (tobacco cessation, regular physical activity, heart-healthy diet etc.) and effective management of any under- lying medical condition.

Secondary prevention interventions, including medications and lifestyle modifications, have been shown to be important in minimising repeat events, as well as being cost-effective (Perk et al. 2012). Despite the proven benefits of secondary prevention, use of relevant medicines for CVD is low worldwide and systematic approaches are needed to improve the long-term use of effective drugs (Yusuf et al. 2011).

In September, 2011 the United Nations (UN) held a meeting on the prevention and control of NCDs, including CVD. This was only the second time in its history that the UN held a summit on a health issue, with the aim of:

The meeting led to the adoption of a Political Declaration, signed by all UN Member States, which outlines commitments to strengthen prevention and control of NCDs (United Nations, general Assembly, 2011).

One of the first steps following the declaration was the development of the NCD global Monitoring Framework adopted by the World Health Assembly, the governing body of the World Health Organisation, in 2013. The GMF sets out a series of targets for NCDs and serves as a foundation for action on prevention, control and the strengthening of health systems to address NCDs (World Health Organization, 2013). The overarching objective of the global Monitoring Framework is a 25 percent relative reduction in overall mortality from cardiovascular disease and other NCDs by 2025.

As a result of continued advocacy and leadership from the World Heart Federation, together with its members and other agencies working on non- communicable diseases (NCDs), in May, 2013, the World Health Organisation passed a comprehensive set of targets and indicators to reduce NCDs by 2025. Member states also endorsed the WHO global NCD Action Plan 2013–2020 (World Health Organization, 2013), which urged countries to develop comprehensive National Action Plans on NCDs by the end of 2013, a process which has been extended to 2015.

The programme also aimed to build awareness of CVD risk factors, and communicate the importance of CVD prevention throughout a person’s life. To achieve this goal, the Emerging Leaders Programme (www.championadvocates.org/en/emerging-leaders) has been created by the World Heart Federation to develop a long-term cadre of experts who collaborate, research and act to reduce premature mortality from CVD globally by at least 25 per cent by 2025. The new Emerging Leaders for 2014-15 met in April, 2015 in Lima and nominations for next year’s Emerging Leaders programme opened in August, 2015.

Finally, the World Heart Federation works to engage with the media to build awareness around heart health, primary and secondary prevention and to help journalists improve reporting of CVD prevention and treatment worldwide. The legacy of the Champion Advocates Programme are the CVD Roadmaps, which focus on the 25x25 targets, with particular emphasis on secondary prevention, tobacco control and management of raised blood pressure. 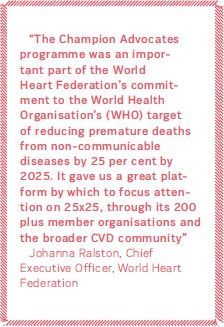 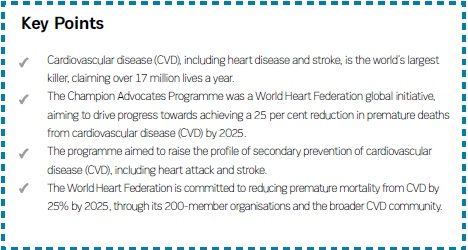 Nothing about me without me An empowered activated patient: Understands their health condition and its... Read more

The EUROSON 2015 congress is organised by the Hellenic Society of Ultrasound in Medicine and Biology (HSUMB) and the European... Read more

The world heart federation’s commitment: 25% by the year 2025 Cardiovascular disease (CVD), including heart disease and stroke, is the leading cause...