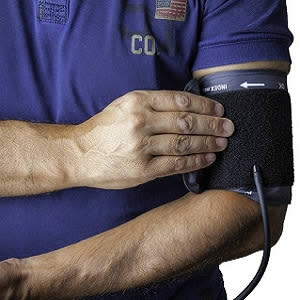 Share
Download PDF
High blood pressure is a leading cause of cardiovascular disease worldwide. Now, results from the U.S. government-funded SPRINT MIND Study show that aggressive lowering of systolic blood pressure is not only good for the heart – it can also help keep the brain healthier.
"This is the first randomised clinical trial to demonstrate a reduction in new cases of MCI [mild cognitive impairment] alone and the combined risk of MCI plus all-cause dementia," said Jeff D. Williamson, MD, MHS, Professor of Internal Medicine and Epidemiology and Chief, Section on Gerontology and Geriatric Medicine at Wake Forest School of Medicine.
The results of this large-scale, long-term clinical trial provide the strongest evidence to date about reducing risk of MCI and dementia through the treatment of high blood pressure. These new findings were reported by Dr. Williamson at the Alzheimer's Association International Conference (AAIC) 2018 in Chicago.
"This study shows more conclusively than ever before that there are things you can do – especially regarding cardiovascular disease risk factors – to reduce your risk of MCI and dementia," said Maria C. Carrillo, PhD, Alzheimer's Association Chief Science Officer, who noted that the results fit well with recent population data showing reductions in new cases of dementia in developed Western cultures.
"The future of reducing MCI and dementia could be in treating the whole person with a combination of drugs and modifiable risk factor interventions – as we do now in heart disease," Carrillo suggested.
The Systolic Blood Pressure Intervention Trial (SPRINT) compared two strategies for managing high blood pressure (hypertension) in older adults: an intensive strategy with a systolic blood pressure (SBP) goal of less than 120 mm Hg versus a standard care strategy targeting an SBP goal of less than 140 mm Hg. Previously, SPRINT demonstrated that more intensive blood pressure control reduced the risk for cardiovascular morbidity and mortality.
SPRINT Memory and Cognition IN Decreased Hypertension (SPRINT MIND) examined whether treating to the lower blood pressure target reduces the risk of developing dementia and/or MCI, and reduces the total volume of white matter lesions in the brain as shown by magnetic resonance imaging (MRI). Study participants were 9,361 hypertensive older adults with increased cardiovascular risk (based on the Framingham risk score) but without diagnosed diabetes, dementia or prior stroke. Participant mean age was 67.9 years (35.6% women) and 8,626 (92.1%) completed at least one follow-up cognitive assessment.
Recruitment for SPRINT began in October 2010. At one year, mean SBP was 121.4 mmHg in the intensive-treatment group and 136.2 mmHg in the standard treatment group. Treatment was stopped in August 2015 due to cardiovascular disease (CVD) benefit after a median follow up of 3.26 years, but cognitive assessment continued until June 2018.
In SPRINT MIND, the researchers found a statistically significant 19 percent lower rate of new cases of MCI (p=0.01) in the intensive blood pressure treatment group. The combined outcome of MCI plus probable all-cause dementia was 15 percent lower (p=0.02) in the intensive versus standard treatment group. There was a non-significant reduction in probable dementia alone (HR=0.83, p=0.10). Serious adverse events of hypotension, syncope, electrolyte abnormalities, and acute kidney injury or acute renal failure, but not injurious falls or bradycardia, occurred more frequently in the intensive-treatment group than in the standard-treatment group.
"These results support the need to maintain well-controlled blood pressure, especially for persons over the age of 50," said Dr. Williamson."
In a related abstract reported at AAIC 2018, Ilya Nasrallah, MD, PhD, of the University of Pennsylvania, Philadelphia, reported preliminary results from 673 participants in SPRINT MIND who were recruited for brain MRI. Primary outcomes included change in total white matter lesion (WML) volume and total brain volume (TBV). Follow-up MRIs were obtained for 454 (67.4%) participants at a median of 3.98 years post-randomisation.
In this sub-study, WML volume increased in both treatment groups, however the increase was significantly less in the intensive treatment group. There was no significant difference in total brain volume change.
White matter lesions are frequently indicative of small vessel disease and linked to higher risk of stroke, dementia and higher mortality. While white matter lesions are thought to increase the risk of vascular dementia, they also may be a risk factor for Alzheimer's disease. People living with dementia may have Alzheimer's disease and white matter lesions at the same time. Research has demonstrated that when people have more than one type of disease-related brain changes, the cognitive consequences are greater.
Source: Alzheimer's Association
Image Credit: Pixabay

There is a positive correlation between body mass index (BMI) and blood pressure, according to data from a large ongoing... Read more

Researchers have combined wireless and ultrasound technologies to develop a wearable patch that can monitor blood pressure... Read more

It is estimated that one in two women and one in three men will likely be diagnosed with dementia, Parkinson's disease, or... Read more