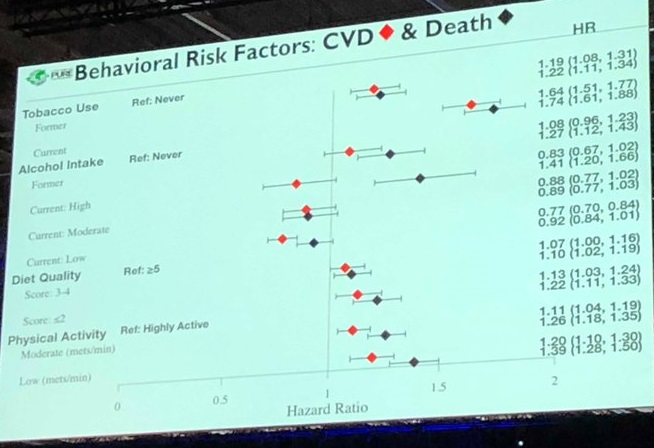 The population attributable fraction, which combined information on the prevalence of each risk factor with its associated risk, was used to estimate the proportion of an outcome accounted for by a given factor. Analyses were adjusted for all risk factors, age, sex, and region.
The average age of the population was 50 years and 58% were female. The proportions of participants from high, middle, and low-income countries were 11%, 66%, and 23%, respectively. During the 9.5 years of follow-up, there were 10,234 deaths and 7,980 cases of major cardiovascular disease, of which 3,559 were heart attacks and 3,557 were strokes.
The 13 individual risk factors accounted for about 70% of cardiovascular disease cases. The greatest contributors were hypertension (25.0%), abdominal obesity (8.4%), low education (8.1%), tobacco (6.8%), and dyslipidaemia (6.5%). Hypertension was a larger risk factor for stroke than myocardial infarction. Additionally, ambient air pollution (a community exposure) added to the risk of cardiovascular disease.
The 13 modifiable risk factors accounted for 72% of deaths, with the largest contributors being low education (16.0%), smoking (11.0%), hypertension (10.9%), household pollution (8.4%), poor diet (7.9%), and low grip strength (7.6%).
“The impact of low strength, low education and air pollution on mortality is not widely appreciated,” said principal investigator Professor Salim Yusuf of the Population Health Research Institute, McMaster University, Hamilton, Canada. “Associations with outcomes were generally similar for most risk factors in high, middle, and low-income countries. However, the contribution of some risk factors to cardiovascular disease and death varied according to how common they were in that country – for example smoking, obesity, education, and indoor air pollution from cooking with solid fuel.”
He concluded: “Regardless of where you live, there are several things that can be done to substantially reduce the risk of  having a heart attack or a stroke including avoiding smoking, controlling blood pressure and blood cholesterol, being physically active and improving muscle strength, and eating a balanced diet which includes lots of fruits and vegetables, but also a moderate amount of nuts, fish, unprocessed meats and dairy products.”
Source: Dr. Saleem Yusuf's presentation/ESC Congress 2019/The Lancet
Image and slide credit: Dr. Saleem Yusuf

According to findings published in the European Heart Journal, over two-thirds of deaths from heart disease worldwide could be... Read more

Is Obesity Only the Individual's Responsibility?

Research based on 5425 citizens' responses to a questionnaire survey has illuminated that obesity causes are linked to various... Read more