Long-term Mechanical Circulatory Support (MCS) was initially used in clinical practice to bridge patients in end-stage heart failure through to heart transplantation. Rapid developments have, however, led to the use of newer generation devices that promise to minimise the morbidity and mortality associated with their use and to improve the quality of life of patients. This article uncovers the expanding role of these devices and explores their further use.

MCS was initially designed to support circulation where patients were either heart transplantation candidates or were likely to become candidates after a period of support. The latter category had initially one or more contraindications to heart transplantation usually due to inadequate cardiac output, and it was likely that, after a period of support, the end organ function would recover and they would become heart transplant candidates. The results for this type of indication have been excellent and, although data from multicentre randomised controlled trials are missing, it seems that the previously supported recipients of MCS were having as good as and often better outcomes than the unsupported ones.

The industry developed these devices to support patients up to two years. Left ventricular assist devices (LVADs) like the HeartMate (Thoratec Corp., Pleasanton, CA), Thoratec (Thoratec Corp., Pleasanton, CA), and Novacor (WorldHeart, Oakland, CA) have found widespread worldwide use among transplant centres. Heart failure, in the region of millions both in Europe and the US, is expected to increase due to the ageing population and improved post-infarction survival rates. Also, the number of heart transplants decreases worldwide due to shortage of donors. For these reasons, it is clear that the future of MCS should lie in the treatment of end-stage heart failure in the general population beyond just transplant lists.

The initial intent for the MCS was destination therapy, an implant that chronically supports the heart failure recipient until death. The discovery of immunosuppressive agents resulted in successful transplant programmes that put this on the backburner until the 90’s, when the National Heart, Lung, and Blood Institute (NHLBI) of the US began funding a multi-centre randomised controlled trial (RCT) called Randomised Evaluation of Mechanical Assistance for the Treatment of Congestive Heart Failure (REMATCH) trial (Rose et al. 1999, Rose et al. 2001).

To date, the REMATCH trial is the only RCT to examine the role of MCS as a destination therapy in ineligible for- transplantation end-stage heart failure patients. It compared long-term MCS to Optimal Medical Therapy (OMT) and it employed a pulsatile pump (Heart Mate I, a first generation implantable device). It demonstrated a clinically significant survival benefit (52% in the LVAD group vs. 25% in OMT group in one year, p=0.002, and 23% vs. 8% respectively in two years, p=0.09) and an improved quality of life in LVAD-treated patients.

After completion of the REMATCH trial in 2001, MCS for destination therapy was recommended for patients with advanced chronic heart failure (ACHF) not responsive to optimal medical treatment (OMT) and ineligible for heart transplantation.

Another prospective, nonrandomised trial called INTREPID (Rogers et al. 2007) followed the REMATCH trial and confirmed its results. The INTREPID demonstrated significant 6- and 12-month survival benefits (survival 46% in the LVAD group vs. 22% in the OMT group, p = 0.03 and 27% vs. 11%, p = 0.02, at 6 months and 12 months respectively) and improved quality of life in LVAD treated patients who were non-transplant candidates.

Despite the fact that the annual candidacy for MCS as destination therapy in the US is estimated to be up to hundreds of thousands of patients per year, fewer than 300 patients were implanted between 2004 - 2006 (Parides et al. 2006).

The Thoratec Heart Mate XVE LVAD, known as Heart Mate I, used in the REMATCH trial, and the Novacor LVAD used in the INTREPID trial were the most widely-used first-generation LVADs. The use of these devices in those two trials was associated with several severe adverse events: mainly thromboembolic and neurologic events, infection, bleeding, and device malfunction or failure. In the REMATCH trial, freedom from device replacement at one and two years was 87% and 37%, respectively, and, after sepsis, device failure was the most common cause of death.

It became apparent that the devices built with the BTT indication in mind were not appropriate devices for long term, permanent support or destination treatment. The need for a new generation of improved devices to address adverse events associated with long term MCS was evident.

Newer generation implantable long-term LVADs evacuate blood from the left ventricle and pump it to the systemic circulation, in a continuous flow pattern. Continuous blood flow is generated by axial flow pumps with an impeller rotating at a high speed, or by sophisticated centrifugal pumps with rotors spinning at lower speeds. Devices with mechanical rotor bearings have been characterised as second generation LVADs, while devices with bearingless rotors based on magnetic, hydrodynamic or hybrid levitation have been characterised as third generation LVADs. The most commonly used second generation devices are axial flow LVADs, while third generation devices have centrifugal or axial flow pumps (see table 1). 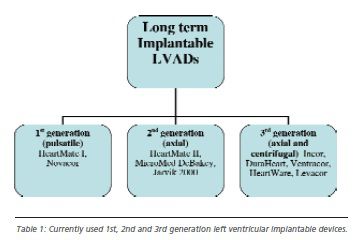 Since the early days of long-term LVADs as BTT devices, it was noted that the supported heart sometimes recovered to such an extent that heart transplantation was cancelled. The first study to prospectively quantify the rate of heart recovery was by the LVAD working group (Maybaum et al. 2007). They prospectively studied 67 patients supported with different devices as BTT and noticed recovery sufficient to allow explantation of the device in 9% of the patients. This patient population included patients with acute and advanced chronic heart failure (CHF). In the advanced CHF population the recovery rate sufficient to allow explantation was only 4% (2 out of 46 patients).

The Harefield group published a protocol of BTR based on clenbuterol (Birks et al. 2006). Clenbuterol was administered to prevent myocardial atrophy after patients supported with LVADs also received optimal medical treatment with lisinopril, carvedilol, spironolactone, and losartan. The group achieved an excellent recovery rate that seems to be sustained during follow-up, which has exceeded the four-year mark.

It seems that apart from the cases where “spontaneous” recovery of the heart function in patients supported with LVADs happens to occur, these devices can be used electively as platforms that enable the application of therapies that promote reverse remodeling of the failing heart to the extent to safely allow discontinuation of the MCS. This is a very appealing application of this kind of technology and a significant advantage over heart transplantation.