The primary reason for the development of cardiac CT was the expectation that CT could replace diagnostic cardiac catheterisation procedures, an expensive study that, due to the need for arterial catheterisation, has a relatively high complication rate. But where will this relatively new technology go, and how will it improve imaging techniques for cardiologists? This article explores the issues involved.

4-slice CT systems enabled calcium scoring, which is used in cardiac risk assessment, and gave a glimpse of the potential for assessing the coronary arteries using CT angiography (CTA). 16-slice systems delivered negative predictive values comparable to conventional cardiac catheterisation (i.e., ability to safely rule out the disease), though the selection criteria for patients were exacting. A number of studies have compared 64-slice CT to the gold standard of cardiac catherisation, including those summarised in table 1 (see below). When the data is combined, the sensitivity of 64-slice CT is about 92% and specificity 96%. Most importantly, the negative predictive value is 98%. In other words, if a patient has a negative scan, there is a high degree of certainty that the patient can be safely discharged. 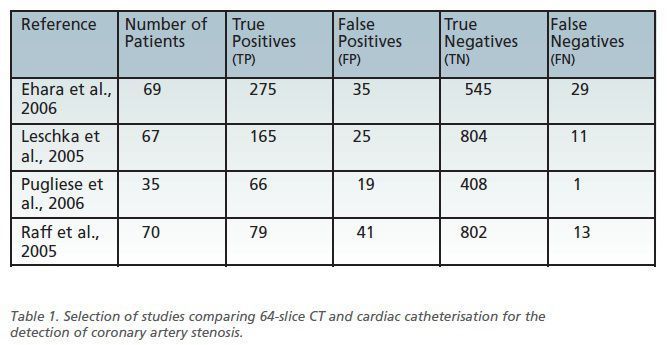 However, radiation dose for cardiac studies is a significant concern. CT is well recognised as delivering a high radiation dose to patients and cardiac CT is one of the highest dose CT exams, due to the need to overlap slices to ensure sufficient raw data is acquired. Cardiac catheterisation also incurs a high radiation dose. The issue is that CT will be used with patients with a lower pre-scan probability of coronary artery disease. As a result, the justifiable dose is lower. All CT manufacturers have made significant progress in lowering the radiation dose by reducing the amount of wasted x-ray exposure. For example, using axial image acquisition instead of spiral acquisition or applying more aggressive ECG gating techniques can significantly reduce the dose.

CT technology has not stopped with 64- slice systems. In 2005, Siemens Medical Solutions introduced the dual source CT system (Somatom Definition) that halved the temporal resolution. Temporal resolution is the key factor in cardiac imaging since it determines the heart rates that can be effectively imaged without resorting to heart rate control medication.

In a normal CT system, the highest possible temporal resolution is half the gantry rotation time. By adding a second source and detector the temporal resolution is reduced to one quarter the rotation time. Testing with dynamic phantoms shown by ECRI Institute (May 2008) show that heart rates up to 85 bpm and variable heart rates can be successfully imaged. For comparison, normal 64-slice systems are typically limited to 65 bpm and stable heart rates. By removing the need for medication, patient scheduling becomes easier and the need to monitor patients before and after the scan is reduced.

Other developments are also now becoming commercial realities. Most notably is a 320-slice system (Aquilion One, Toshiba Medical), which acquires 16cm long volumes in each rotation. So, the whole heart can be acquired in a single rotation. In any other CT scanner it is necessary to make multiple rotations and select the best data after the scan. A necessary assumption is that the heart returns to exactly the same position for each cycle. With the 320-slice system, this is no longer a problem. So, smaller vessels should be better visualised. Other manufacturers are also working on extending the coverage.

There is more to cardiac imaging than the coronary arteries. CT is also now being used for myocardial perfusion imaging, quantitative assessment of the ventricular output, and plaque characterisation. It is early days but results are promising. It may be that CT will become a one-stop shop tool for cardiac risk assessment. However, dose concerns and over utilisation of the technology are issues that must be addressed.

The common early expectation was that demand for coronary CTA would be overwhelming and cardiac CT would rapidly become a major source of patients and revenue. However, anecdotally it appears that the number of exams remains low (e.g., Dowie, 2007). Why the slower than expected utilisation? There are probably many reasons, including physician competence and credentialing requirements, staff training, referral practices, appropriate indications, and reimbursement.

The appropriate indications and reimbursement issues are closely linked and subject to considerable debate and confusion. In 2006, a multidisciplinary clinical committee in the US published a report that summarised their conclusions regarding the appropriate indications for coronary CTA that are supported by evidence (Hendel et al. 2006). A number of indications were found to be appropriate, including the evaluation of some intermediate risk patients with acute chest pain, such as would present to emergency rooms.

A significant related question is whether a coronary CTA is a suitable replacement for a nuclear stress test. The 2006 appropriateness criteria (Hendel et al., 2006) specify that only patients with equivocal stress tests or those unable to exercise (i.e., can’t complete a stress test), are suitrotation time. able candidates for coronary CTA. The nuclear stress test is routinely performed on low and intermediate risk patients that present with chest pain by the cardiologist. A nuclear stress test is a physiological study that identifies regions of the myocardium that receive inadequate blood flow during exercise, usually caused by significant arterial stenosis.

In contrast, coronary CTA detects arterial stenosis that may or may not be significant. Supporters of the stress test point out that the physiological nature of the stress test provides more relevant diagnostic information. Despite this difference, a recently published direct comparison of the imaging techniques shows similar diagnostic accuracy (Gallagher et al., 2007). So, for the time being, the nuclear stress test remains the primary option. However, coronary CTA may replace nuclear stress test in the future.

There is considerable pressure, particularly from radiologists, to expand the indications for coronary CTA. However, insurance companies are reluctant to change their policies despite coronary CTA being about the same cost as a nuclear stress test. Possible reasons for not changing the referral policies include the concern that utilisation may be less controllable and the high number of incidental findings may increase costs of follow-up diagnostic tests. So overall, costs would increase. In addition, cardiologists would lose patients undergoing stress studies, which they usually conduct and are reimbursed for. The bottom line is that economic and political issues are likely to be important factors in this debate and uncertainty over reimbursement remains controversial.

The primary reason for the development of cardiac CT was the expectation that CT could replace diagnostic cardiac catheterisation procedures, an expensive...