A - Institute of Cardiology, University of Bologna

Access to Technologies: A Matter of Cost or of Effectiveness?

In this article, we will firstly present the case of two patients for whom, despite similar medical conditions, different therapies were advised, to highlight the inequality in access to medical technologies in Europe. Then, we will look at the matter of cost-effectiveness – are patients being differently treated in the same cases, due to financial pressures and despite thorough guidelines?

A male patient, Luigi, aged 58, living in Italy, was diagnosed as being affected by dilated cardiomyopathy with depressed left ventricular ejection fraction (26%), in the absence of coronary artery disease. He was followed for the last three years by a team of physicians working in a heart failure clinic, but in the last year his condition worsened (NYHA class III), with repeated hospitalisations for acute heart failure and recurrent atrial fibrillation.

Eight months ago, he underwent implantation of a device for cardiac resynchronisation therapy and in the following weeks his clinical condition improved markedly, with no further need for hospitalisation, no recurrences of atrial fibrillation and the possibility of reducing the use of diuretics. Quality of life and exercise capacity improved and he is now able to perform moderate physical activity without any problem.

Twenty days afterwards he was informed that his closest friend had died suddenly, during sleep, at the age of 61. As soon as he received this news, he had a sudden loss of consciousness, followed by delivery of a shock by the implanted device, with prompt resumption of consciousness. He was admitted to the emergency department and the physicians ruled out any coronary or major cardiovascular event; interrogation of the device revealed that loss of consciousness was due to high rate ventricular tachycardia at 230 bpm. The cardiologist said that the appropriate and prompt device activation had “saved his life”.

Luigi is in contact with his sister Anna, aged 62, who left Italy 25 years ago, moving to France. She too is affected by dilated cardiomyopathy (left ventricular ejection fraction 28%) and after a diagnostic work up (echocardiogram, exercise test, myocardial scintigraphy), was followed by her GP. She has been in stable condition for one year, but in the last six months, her condition worsened with shortness of breath requiring increasing dosages of diuretics, ace-inhibitors and carvedilolol. The GP sent her for a series of consultations with the specific request of deciding about device therapy.

Unfortunately, the patient received conflicting advice: a first cardiologist suggested implanting a defibrillator, a second, after an echocardiogram showing ventricular dyssynchrony, advised implantation of a biventricular pacemaker (CRT-P device) and a third cardiologist told her that “The ideal device would be a device for biventricular pacing & defibrillation (CRT-D device) but the budget of our hospital is limited and since we are in October it is better to wait for the beginning of next year”.

Anna was confused by the different suggestions coming from the cardiologists who examined her and had difficulty understanding why there were discrepancies in decision-making; she was also worried about the potential risk of waiting before a decision.

The use, in clinical practice, of electrical devices to prevent sudden death by terminating ventricular tachyarrhythmias or to improve heart failure by resynchronising the left ventricle, is currently supported by strong evidence (Boriani et al., 2007). This evidence has been the basis for consensus guidelines (Vardas et al., 2007), which should constitute the reference for daily clinical practice.

Despite this, appropriate implementation of guidelines on the use of electrical devices in clinical practice is still an open issue and wide heterogeneity exists in implant rates. Implantable defibrillators (ICDs) and especially devices delivering both biventricular pacing for cardiac resynchronisation and defibrillator back-up (CRT-D devices) still have relatively high up-front costs and, in the absence of any economic analysis, their costs represent a limitation to widespread clinical use in the context of national or local financial constraints (Boriani et al., 2002).

Guidelines do not Govern Resource Usage

European guidelines, according to general policy, do not incorporate considerations on resource allocation and do not analyse the financial implications of device implementation, since all these evaluations are dependent on the specific national context where implementation has to be considered and they should thus be done at a regional/national level and not at a European level (Priori et al., 2003).

While in some countries this topic was directly addressed through national policy (this is the case of NICE), in others\ no precise rules were defined, leading to considerable variations in device therapy adoption, depending on local conditions (regional or hospital budgets, physicians’ judgement, reimbursement, etc.). Extensive variations in ICD or CRT-D device implant rates exist among the various European countries, also with some differences between ICD and CRT-D or CRT-P implant rates (see figure 1) (Ector and Vardas, 2007). 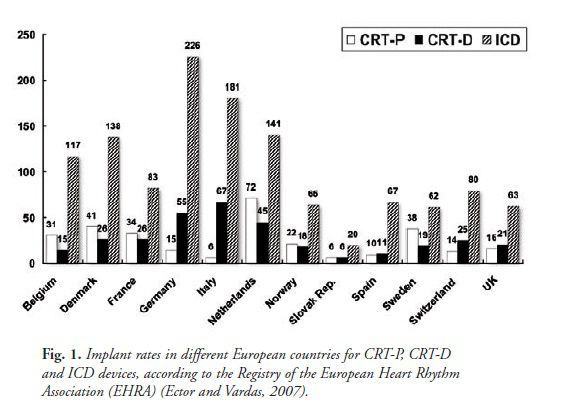 Today, a series of tools for economic analysis (cost-effectiveness, cost utility and cost benefit analysis) may help in appropriate resource allocation at a national or regional level, according to a defined setting of healthcare priorities. Economic analyses are also available for ICD, CRT-D and CRT-P therapies (Boriani at al., 2002 and 2007) in order to better analyse the relationship between the clinical effectiveness attainable with these therapies and the cost of these devices.

In view of the benefit, confirmed by clinical trials, it appears that despite the high initial cost these devices may constitute a valuable investment for the healthcare systems in appropriate patients. Un - fortunately, economic analyses do not at present seem to represent the basis for device therapy adoption in most European countries (Kearney et al. 2006, Boriani et al. 2007).

A closer relationship between physicians, administrators and health economists, who often do not share the same language, and increased use of data coming from Health Technology Assessments and economic analyses, in the form of single studies or meta-analyses, may provide the basis for a more rational approach to the affordability of therapies, such as ICD and CRT-D, with a high initial financial burden but proven, evidence-based benefits.

This may be of value for ensuring fairness in access to these therapies, particularly for some less favoured subgroups of patients (females, the elderly, minority groups, etc.).

In addition, national and international registries focused on daily clinical practice may help in verifying and monitoring implementation of current guidelines in the real world. Such steps will constitute essential components of the complex pathways that, by moving from the evidence derived from clinical trials, will lead to the delivery of appropriate care to individual patients.


Access to Medical Technology in Europe In this article, we will firstly present the case of two patients for whom, despite similar medical conditions,