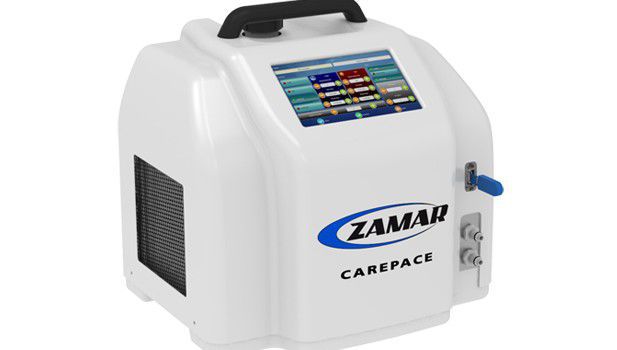 Until now, the patient was instructed not to move the arm for the first 24 hours to avoid the electrodes displacement, and ice was applied locally to prevent hematoma. Zamar developed a containment, cooling and compression wrap system called “CarePace”. These three features of the system, combined into a single device, allow substantial reduction of the above mentioned complications, thus representing a significant savings for the hospital and greater safety and higher comfort for the patient. • CarePace wrap allows mobilization of the arm but not of the shoulder, avoiding the movements with risk of lead displacement • The device applies a mild compression, adjuvant normal dressing • CarePace is equipped of internal cooling circuit with possibility of having a constant and controlled temperature at the level of the pacemaker pocket and the subclavian vein puncture site. The system is sterile, disposable and easy to apply, to be used in the first 24 hours after implantation, to be removed before hospital discharge. It can be easily applied directly to the electrophysiology room immediately after the procedure and administered by the nursing staff.
× × × × × × × × ×
[email protected]
Mate Vlašića 26,
Poreč
52440
× × × × × × ×