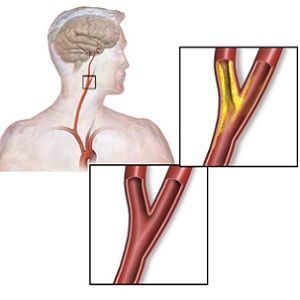 Share
Download PDF
People with diabetes have a significantly increased risk of strokes with worse outcomes than the non-diabetic population. New research shows that 3D MRI can identify high risk cardiovascular biomarkers, such as intraplaque haemorrhage, in diabetic patients before onset of carotid artery stenosis. The findings are being presented next week at the annual meeting of the Radiological Society of North America (RSNA).

The carotid arteries are vessels on each side of the neck that supply oxygenated blood to the head. Carotid artery stenosis (narrowing) is associated with risk of stroke, but less is known about stroke risk in people with little or no narrowing of these arteries. As such, researchers employed 3D MRI to study the carotid arteries for evidence of intraplaque haemorrhage (IPH), an indicator of advanced atherosclerotic disease.

"A recent analysis of multiple studies has shown that people with carotid artery narrowing and IPH have a five- to six-times higher risk of stroke in the near future compared to people without," says study author Tishan Maraj, MBBS, imaging analyst at Sunnybrook Research Institute and MSc candidate at the University of Toronto in Toronto, Canada.

For more than a decade, 2D MRI has been used to identify and characterise carotid artery plaques. The 3D method provides an extra level of imaging power, according to Dr. Maraj. "The advantage of 3D MRI is you can image the entire carotid artery and pinpoint the area of interest over a shorter period of time compared with multiple 2D sequences," he explains.

Dr. Maraj notes that the study did not look at outcomes for the patients and did not draw any conclusions on whether people with IPH will develop carotid artery blockages more quickly than those with no IPH present. However, it is already known that blood is a destabilising factor of plaque that promotes rupture, setting off a chain of events that can lead to a stroke.

Although there is no treatment for IPH at this time, the doctor says identification of it may help with risk stratification and could even have applications in the non-diabetic population. 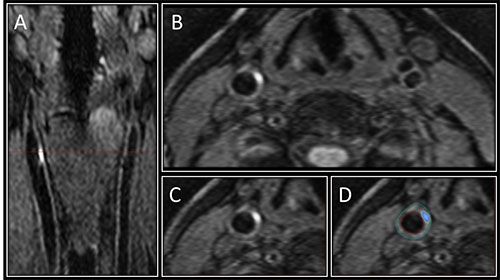 Figure 1. Image A shows the 3D MRI intraplaque haemorrhage (IPH) sequence as acquired in the coronal plane. The red dotted line indicates the level at which the reformatted axial plane, B, was obtained. C shows the section of the right carotid artery with a region of high signal consistent with IPH. Contours are drawn for the outer wall (green) and lumen (red) with the area of IPH in this segment shaded blue in D.


One for the Birds? Pigeons Can Discern Cancerous Images »»

An imaging study shows that the area of the brain associated with impulsivity and the development of obsessive-compulsive disorder... Read more

A certain type of lung nodule visible on lung cancer screening CT exams is associated with a higher risk of lung cancer for women... Read more

RSNA15: Innovate to Secure the Future

The Radiological Society of North America (RSNA) continues to draw delegates from across the globe to Chicago, and next week’s... Read more

healthmanagement, #RSNA15, RSNA 2015, stroke risk, carotid stenosis, intraplaque haemorrhage New research shows that 3D MRI can identify high risk cardiovascular biomarkers, such as intraplaque haemorrhage, in diabetic patients before onset of carotid artery stenosis. The findings are being presented next week at the annual meeting of the Radiolo

The COVID-19 pandemic has been an accelerator for a profound paradigmatic... 117588Read more