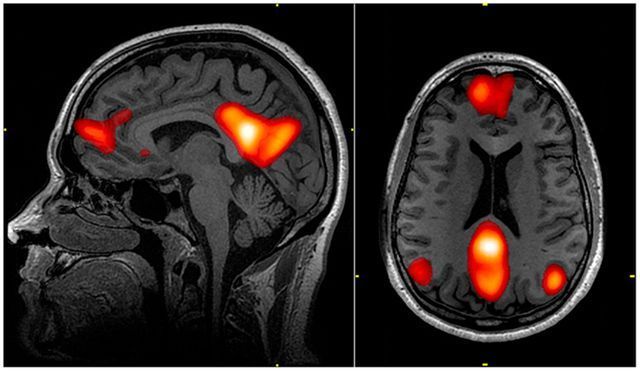 Share
Download PDF
New research indicates that changes in functional connectivity between brain regions, as can be measured by magnetic resonance imaging (MRI) of the resting state, may underlie the pathogenesis of fibromyalgia and other chronic pain states. As such, this parameter maybe used to monitor changes in brain function associated with pharmacological treatment, and may also be able to predict treatment response.
Fibromyalgia is a chronic pain syndrome characterised by widespread pain, fatigue, poor sleep, and memory and mood disturbances. Although the underlying pathophysiology is not entirely understood, fibromyalgia has been associated with augmented central nervous system (CNS) processing of nociceptive stimuli using both quantitative sensory testing (QST) and functional neuroimaging. Treatment of fibromyalgia in terms of a clinically relevant reduction in widespread pain is often challenging and both pharmacological and non-pharmacological approaches are currently recommended. A key limitation in the treatment of fibromyalgia, and chronic pain in general, is that there are no reliable tools to guide treatment assignment for individual patients. As such, clinical routine largely relies on trial and error.

A study by Harris et al. (2013) showed that chemical and functional imaging in fibromyalgia can be used to predict treatment response to pregabalin in fibromyalgia. In the new study, the authors sought to identify functional connectivity patterns at baseline that would differentially predict treatment response to milnacipran (MLN) as compared to placebo. Since preclinical studies of MLN suggest that this medication works by augmenting antinociceptive processes, the authors specifically investigated brain regions known to be involved in pain inhibition.

The researchers used a set of inclusion/exclusion criteria to select participants (23 female patients diagnosed with fibromyalgia) for this study. Patients were randomised to either MLN first or placebo first for Period 1. Patients that entered the MLN period first were dose-escalated over two weeks to a stable dose of 200 mg/day, and maintained this fixed daily dose for four weeks. Subjects randomised to placebo for the first period took matching placebo pills for six weeks. After the six total weeks for this period, subjects underwent a post-treatment neuroimaging session. Following the completion of Period 1, all subjects underwent a one-week taper and two weeks of placebo washout. This washout period included a one-week single-blind placebo run-in period to reduce the possibility of placebo effects during the first double-blind treatment period. After the washout period, participants crossed over to the other study drug for the second period.

Neuroimaging sessions for Period 2 were identical to those in Period 1. Placebo data included in all analyses came from either Period 1 or Period 2 (depending on treatment order), and were included for all subjects regardless of treatment order. All subjects were informed that they would be dosed with MLN or placebo at various times throughout the study, but were not told when they were transferred from one treatment to the other. All investigators and research team members were blinded to study drug and placebo timing.

The authors assessed treatment response for both clinical pain as well as evoked experimental pain in all participants prior to and following each study period. Clinical pain was assessed with the Short Form of the Brief Pain Inventory (BPI) which captures both pain severity (BPI Sev) and interference due to pain (BPI Int) measured over the course of the previous week. Changes in these components (post minus pre) were used as measures of treatment response for clinical pain. Changes in pain both following MLN and placebo were assessed in SPSS, version 20, by performing paired samples t-tests.

Only 15 out of the 29 fibromyalgia patients completed the study. Eight were excluded from the analysis for the following reasons: six withdrew prior to completing all neuroimaging sessions (two prematurely stopped taking MLN, two had side effects from the drug that prevented participation in the trial, and two terminated due to personal reasons), and two additional participants were excluded because they did not reach the pre-specified dose of MLN before imaging.

As a main finding, the authors report that reductions in clinical pain scores during MLN were associated with decreased functional connectivity between pro-nociceptive regions and antinociceptive pain regions at baseline, specifically between the rostral part of the anterior cingulate cortex (ACC) and the insular cortex (IC), as well as between the periaqueductal gray (PAG) and the IC: patients with lower pre-existing functional connectivity had the greatest reduction in clinical pain. This pattern was not observed for the placebo period. However, a more robust placebo response was associated with lower baseline functional connectivity between the ACC and the dorsolateral prefrontal cortex.
Neuroimaging as a Tool For Treatment Response Prediction

This study indicates that ACC–IC connectivity might play a role in the mechanism of action of MLN, and perhaps more importantly fcMRI might be a useful tool to predict pharmacological treatment response.

Despite the small sample size, the rates of both drug and placebo responders in this study are well in line with larger, randomised studies. Consistent with this idea, the effect of any one of the US Food and Drug Administration's approved drugs examined in isolation is modest with a 30 percent improvement in pain occurring in only 30–40 percent of patients (Hauser et al., 2012), which is also the case in other chronic pain states. This stresses the need to develop tools that predict treatment response, in order to then design individually tailored therapies (Woolf, 2010).
Only very recently have studies indicated that brain imaging might be suited to perform such predictions (Harris et al., 2013; Maarrawi et al., 2013). Resting state fcMRI might be a particularly interesting tool, as it is easy and safe to perform with only little demands on patients' cognition and cooperation.

According to an article published in the January issue of Neurosurgery , recent guidelines that seek to reduce the use of neuroimaging... Read more

Neuroimaging is an important diagnostic tool in the assessment of neurological disease, but often unmasks incidental findings... Read more