Clinical And Economic Effects Of The i-Stat POCT Solution

In Germany, emergency departments (EDs) often suffer from overcrowding, which may lead to stressful working conditions, increased risks for patients and costs for additional staff, as well as for investments in equipment. Furthermore, overcrowding has the potential to extend patient waiting times, in some cases rising up to 6 hours and more.1

Over the last few years, an increase of patient demand in hospital EDs by at least 7–10% has been observed.1 This is likely to be partly stimulated by the increasing numbers of elderly people found in Europe, including Germany, which is expected to increase significantly from 2010 onwards.2

Limited resources may also cause additional burdens. While government health spending in Europe tended to be maintained at the start of the economic crisis, cuts in spending really began to take effect in 2010 in response to budgetary pressures and the need to reduce large deficits and debts.2 Furthermore, between 2000 and 2010, a total of 245 hospitals closed in Germany, and there was an 11% decrease in hospital beds.2

Addressing the efficiency of patient testing might be a solution to problems faced in EDs. Average length of stay (ALOS) for patients is often dependent on the turn-around-time (TAT) of crucial laboratory tests. The laboratory process, therefore, has the potential to strongly influence patient throughput in the ED.

Point of care testing (POCT) has been shown in some scenarios to increase the number of patients discharged in a timely manner, determine the priority of urgent but nonemergency patients and decrease delays to treatment initiation.3 The primary advantages provided by POCT devices are increased portability and speed. Using POCT, caregivers can perform, analyse, obtain and act on test results at the bedside in a matter of minutes. Used effectively, POCT has the potential to alleviate the negative effects of overcrowding.1,3-5

This white paper describes the results of a randomised, single-centre trial looking at POCT efficacy within the setting of the busy ED at Augsburg Hospital in Germany. In addition, a survey of employee and patient satisfaction with POCT was conducted after implementation.

Located in Augsburg, Germany, the Augsburg Hospital is a teaching hospital for the Ludwig-Maximilians-University in Munich. The hospital consists of 25 clinics and institutes and houses more than 5,400 employees, including specialists and supportive personnel.6,7

The Augsburg hospital treats approximately 200 patients in its ED each day; this translates to nearly 70,000 patients per year. The ED suffers from a number of resource limitations: physicians, nurses, numbers of examination and treatment rooms; this allows a maximum capacity of only five patients. Overcrowding occurs when the admission rate of emergency patients is higher than the discharge rate of comprehensively diagnosed/treated patients. When this occurs, the amount of patients needing to be treated at any one time is much greater than the ED’s maximum capacity. Effects of overcrowding at the Augsburg Hospital ED are particularly apparent during the morning and in the early evening. The consequence of crowding effects from the patient’s perspective is described by Anantharaman and Seth.8

Approximately one-fifth of ED patients visiting Augsburg Hospital suffer from non-specific chest pain. In order to determine if these patients have acute coronary syndrome (ACS), a troponin test (cTn) is performed. Troponin is a protein that is released when heart muscle is damaged, and higher than normal levels may indicate ACS.9 Most (>70%) potential ACS patients within the Augsburg Hospital ED need additional cTn testing in order to confirm their diagnosis. As a result, an estimated 9,000 to 12,000 troponin tests are performed per year.

The normal TAT for troponin tests can vary between 42 and 121 minutes when performed by the Augsburg Hospital Central Laboratory. In terms of “six sigma methodology” the extreme variation is a sign of an uncontrolled service.10,11 This can lead to an extended LOS, increased waiting times for patients, stressful working situations and higher costs caused by additional staff and overtime payments. Therefore, it was hypothesised that POCT for troponin would reduce ALOS for ACS patients and thereby lead to economic benefits.Furthermore, it was speculated that patients with ACS would benefit clinically from the quick results provided by the Contemporary Troponin-I (cTnI) test that is available on the i-STAT System, a POCT device.12

In the clinical trial, the i-STAT System from Abbott Point of Care was chosen as the POCT device to be tested. The i-STAT System provides lab-quality test results within ten minutes using only small amounts of blood. The i-STAT cTnI test cartridge uses a two-site enzyme-linked immunosorbant assay (ELISA) method, which culminates in the release of an electrochemically detectable product. Sensors measure the product, which is proportional to the concentration of the cTnI within the sample.12 The reasons for choosing the i-STAT System included:

Patients with suspicion of Non-ST-Segment elevation (NSTE)-ACS were investigated. Data was included from those with or without a second troponin test (in Germany, serial testing is not always performed). Patients were excluded if they were treated outside the confines of the ED, or if they were transferred to the ICU before the results of the test were available.

A randomised, single-centre trial (see Figure 1) was conducted at the Augsburg Hospital ED. The TATs of troponin tests were compared between the POCT setting and Central Lab setting in a series of three phases.

In the first study phase, troponin measurement of patients was performed in the Central Lab setting only. During the first week after having implemented a POCT solution for troponin, the second phase was initiated. In this phase, patients were tested in parallel for troponin in the Central Lab and through POCT. Six months later, the third phase took place, and POCT was used exclusively for patient testing.

The primary outcome measure was TAT (defined as time from blood draw to test result). Additionally therapeutic TAT (tTAT; defined as time from test result to therapeutic decision) and LOS were measured. In order to determine employee satisfaction and acceptance of POCT technology, ED-staff who performed POCT (26 people) were queried on different factors (e.g. satisfaction with workflow effectiveness and patient risks). Patient satisfaction was also measured using a survey. Furthermore, the economic relevance of a POCT investment was calculated and investigated in combination with a resource scheduling and smoothing approach and a queuing theory application, both specifically tailored to the Augsburg data setting.15

In this study, reductions in staff costs were determined by estimating reductions in ACS patient monitoring that were the result of a reduced ALOS. 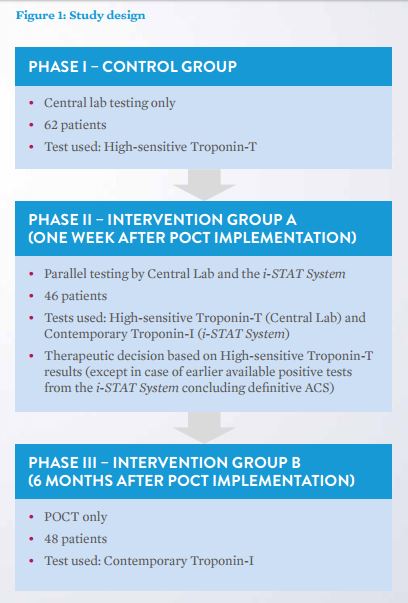 The i-STAT System provides clinical benefits in an ED setting 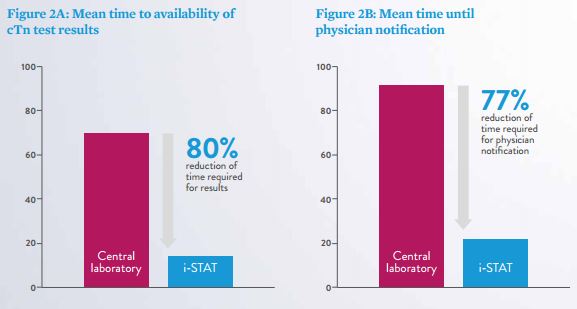 The i-STAT System reduced the time to delivery of test results needed to make clinical decisions in the ED and led, as a consequence in this study, to a shorter ALOS

With the i-STAT System, the time to delivery of results for use in clinical decisions was 40 minutes, which was significantly shortened in comparison to average tTAT for results coming from the Central Lab (110 minutes). This improvement led to an average reduction of ALOS of 70 minutes (Figure 3). 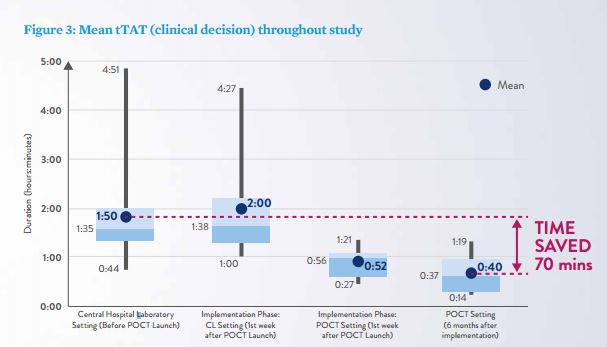 Resources available to the ED limit the maximum number of patients that can be treated at any one time to five. During peak moments, patient demand exceeds ED resources, and patients need to wait.

To determine the effects of reduced ALOS on patient density during a typical day, a patient density model based on an assumption of 185 patients per day was utilised with the ALOSs obtained during the trial. The following outcomes were found:

According to the capacity utilisation model (i.e. calculation) in the ED, with the reduced ALOS from POCT, the required capacity could be reduced by an equivalent of 7 patients. 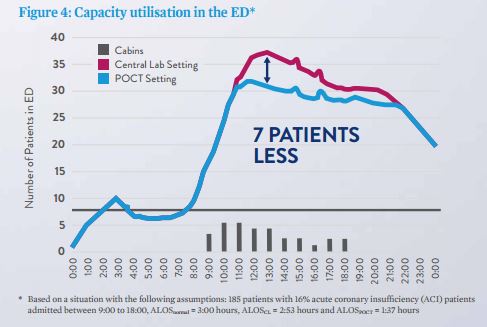 The i-STAT System provides economic benefits in an ED setting

Using information collected from the study on the time needed for patient observation and an ALOS reduction of 70–90 minutes, it was estimated that the i-STAT System saved approximately ¤5.76 per ACS patient in staff costs (reduction of patient monitoring time). Based on 30 ACS patients per day, this totalled ¤179 per day and ¤62,208 per year.

The reduction of ED overcrowding by lowering the patient density by approximately 7 patients (between 9 am and 6 pm) translates to an estimated reduced patient density of 2,555 patients per year. In effect, this would allow the ED to avoid building an additional examination room. It was calculated that POCT would save 45% of staff costs (¤110,000) associated with the new room and the cost of additional examination room equipment (¤28,000). This is a total value of ¤138,000 in avoided investments.

The calculated investment for the i-STAT System was ¤3,730 per year, which is based on the depreciation of the devices as well as the required, weekly quality controls. Compared to the economic benefits, investment in the i-STAT System, even when used only for troponin tests of ACS patients, pays off economically.

Risk-weighted process analysis, a graphical illustration of the hypothesis, demonstrated POCT is advantageous compared to Central Lab testing in terms of quality, risk and cost

The resulting RPA is depicted in Figure 5. 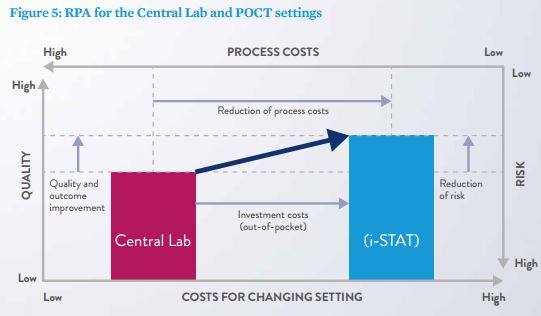 The i-STAT System improved employee satisfaction with the ED process 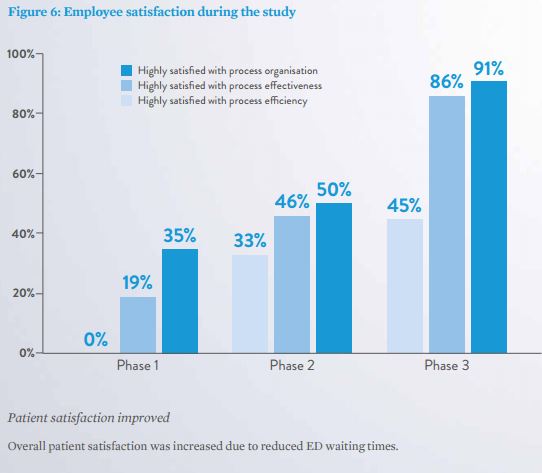 Use of POCT devices within an ED setting has been shown to increase the number of patients discharged in a timely manner, determine the priority of urgent patients and decrease delays to treatment initiation.3 Within the setting of the Augsburg Hospital ED, POCT contributed to reducing “crowding effects”, containing process costs and increasing patient satisfaction because of reduced ED waiting times. Furthermore, it increased the satisfaction of the ED staff with the ED process.

One reason that the staff preferred the POCT setting is the clinical relevance of POCT for ACS patients. POCT offers the opportunity for faster results, so diagnosis can be made more quickly, using Contemporary cTnI tests. Measurement of cTn in the POCT setting was also significantly more acceptable to the ED staff than testing in the Central Lab setting because POCT is considered more of a self-contained process.

Since implementation of the i-STAT System, it has been recognised that a change of setting from Central Lab testing to POCT, in fact, means a shift of workload from Central Lab to the ED staff. The employees’ motivation to use a newly implemented technology, as a part of a new workflow organisation, is crucial to achieving a high level of effectiveness and efficiency. For this reason, it is recommended that the Central Lab be given the task of quality control for POCT devices in order to reduce the burden on ED staff from non-clinical duties.

After performing a confounding analysis on data from the study, it was found that a dysfunctional organisation might overrule positive effects of a POCT solution. The delay between the availability of the test result and notification of the attending physician was found to be particularly sensitive to poor organisational workflow and could still lead to increased ALOS of patients.5 In order to continue profiting from a POCT setting, organisational workflow will need to be addressed within the Augsburg Hospital ED.

Due to the success of the i-STAT System with troponin testing, it was recommended that additional parameters should be leveraged within the ED department. Future candidate tests include C-reactive protein, creatine kinase-MB, and tests useful for determining the speed of blood coagulation, such as the prothrombin time test (PT/INR). All of these tests, with exception of C-reactive protein, can be measured with the POCT device used in the study: the i-STAT System.

Within the setting of the Augsburg Hospital ED, implementation of the i-STAT System contributed to:

• Reducing the effects of overcrowding