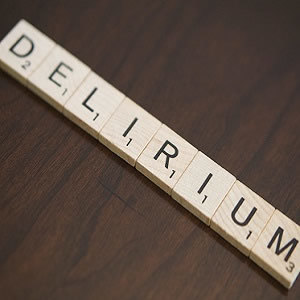 A prospective cohort study conducted in a tertiary level intensive care unit (ICU) in Queensland, Australia aims to investigate the relationship between patient delirium and long-term cognitive impairment. The findings, published in the journal Australian Critical Care, show that ICU delirium was positively associated with impaired information processing speed and executive functioning at six-months post-discharge for this cohort.

"These findings add to the body of evidence of a relationship between ICU delirium and long-term cognitive impairment and support the need for interdisciplinary approaches to both screen for, and reduce delirium in ICU patients," study authors write. "Clinical care strategies that focus on modifiable factors including sensory impairment, immobilisation, metabolic derangement, pain and sedative management, emotional distress and sustained sleep deprivation are recommended."

Delirium is a common neuropsychiatric syndrome that, although occurring in a range of healthcare settings, is particularly prevalent in hospitalised ICU patients. Delirium in the ICU has been associated with adverse patient outcomes, both during hospitalisation and in the longer-term, post-discharge – i.e., prolonged mechanical ventilation; increased ICU and hospital length of stay (LOS); reduced quality of life post-discharge; and increased mortality rates. In addition, patients are also at an increased risk of cognitive impairments months to years after ICU.

Whilst there is a growing body of research exploring the effect of delirium in ICU patients, the relationship between patient delirium and long-term cognitive impairment has not been investigated in settings where low rates of delirium have been reported. In the current study, adult medical and surgical ICU patients receiving ≥12 hour mechanical ventilation were assessed for delirium on at least one day. Cognitive impairment was assessed at three and/or six-months using the: Repeatable Battery for the Assessment of Neuropsychological Status (RBANS); Trail Making Test (TMT) Part A and B; and Mini-Mental State Examination (MMSE).

Of 148 enrollees, 91 (61%) completed assessment at three and/or six months. Incidence of delirium was 19%, with 41% cognitively impaired at three months and 24% remaining impaired at six months. Delirium was associated with impaired cognition at six-months: mean TMT Part A scores (information processing speed) were 7.86 seconds longer than those with no delirium (p = 0.03), and mean TMT Part B scores (executive functioning) 24.0 seconds longer (p = 0.04).

"Testing for cognitive impairment with RBANS and TMT should be considered due to its greater sensitivity in comparison to the MMSE," the authors note. MMSE is a short, screening test that uses a small number of items in a restricted number of cognitive areas. The items used are simple in nature and are sensitive in detecting more severe or obvious cognitive problems. By contrast, RBANS and TMT Part A and B have more items that range in difficulty levels. Consequently, for cognitive deficits caused by delirium, RBANS and TMT Part A and B may be better in detecting more subtle deficits.

LIVES 2017: Which delirium prediction model should we use?

There are conflicting data on the effects of antipsychotic medications on delirium in patients in the intensive care unit... Read more