For the first time since the founding of the European Shock Society (33 years ago), its congress will be held in France, and Paris will host the XVIIth Congress of the ESS from 13thto 15th September, 2017.

An international committee has proposed 55 different topics, and 15 of them have been selected by the members of the ESS Executive Committee and by the French Organising Committee.

* Young investigator < 36 years: please send a copy of your Id to the conference secretariat
** Sepsis Summer School Only: Wednesday September 15, 2017 (Morning) - this registration does not give access to the ESS conference which starts Wednesday afternoon. 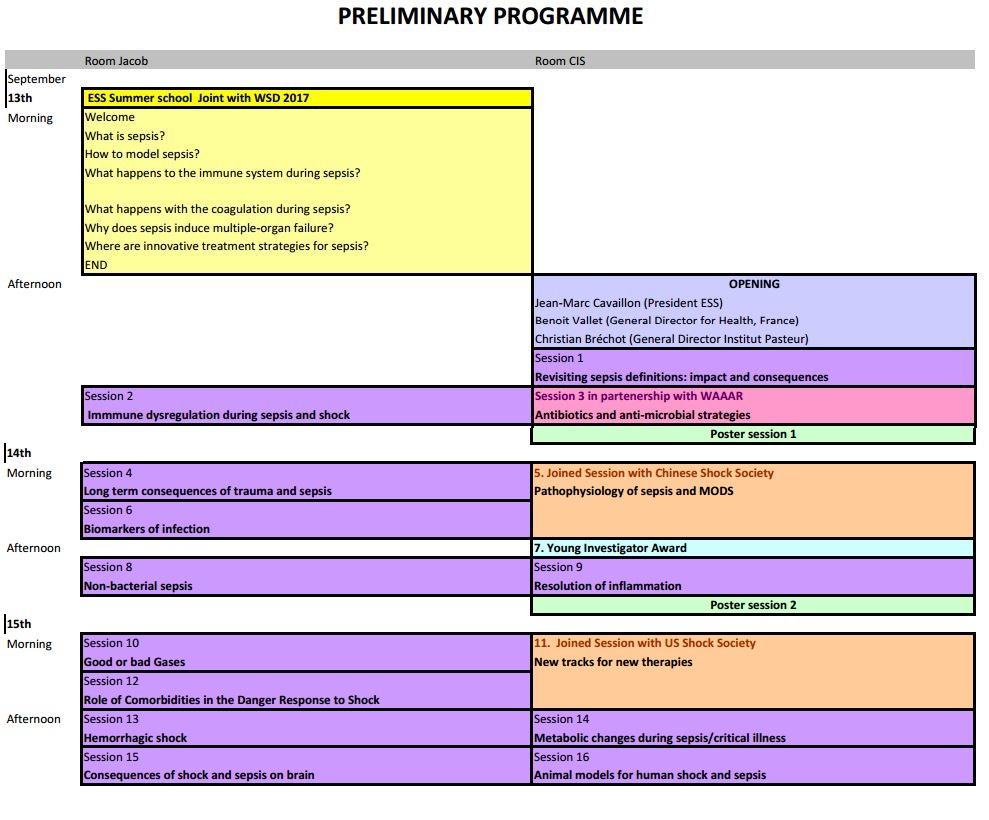 How to get to the Institut Pasteur?

Get off at either "Volontaires" (line 12) or "Pasteur" (lines 6 and 12) station. These stations are just at 5 minute walk from the Institut Pasteur.

Note:
One ticket allows you to travel on the metro and includes all connections as long as you do not exit the metro network.
For most bus and tram routes in Paris and Ile-de-France, one ticket is valid for a single journey without connections regardless of length. On some routes (Balabus, Noctambus, Orlybus, Roissybus, 221, 297, 299, 350 and 351) fares depend on journey length.

Rue du Docteur Roux is a one way street and you pay for parking spaces. Paying public car parks are available at the following addresses:

Next you can either walk about 15 minutes or take the metro (line number 6 direction Charles de Gaulle - Etoile) to get from Montparnasse-Bienvenue station to Pasteur station (one stop).

Orlyval shuttle train: You must buy a special ticket to travel between Paris and Orly via Antony which is valid throughout the metro and RER networks. Fare (information only): € 11,30 (ORLYVAL).
From the Antony RER station, take RER line B in the direction of Gare du Nord or Aéroport Charles de Gaulle and get off at Denfert-Rochereau station. Next take the metro (line 6 direction Charles de Gaulle - Etoile) as far as the Pasteur station.

Orlybus: You must also buy a special ticket to travel by bus between Paris (Terminus at Denfert-Rochereau) and Orly - Fare (information only): € 7,20 - Journey time: 20 to 30 min
From Denfert-Rochereau take the metro (line 6 direction Charles de Gaulle - Etoile) as far as the Pasteur station.

By taxi: If you prefer to travel by taxi, Paris taxis will cost you roughly € 40 per journey.

Finally, the Jetbus will take you to the Villejuif-Aragon metro station, the terminus of line 7.

Metro/RER: Go to the RER station at the airport accessible from Roissy 2, or use the free Aéroports de Paris shuttles if your flight lands at the other terminals. Buy a Paris metro ticket and take the RER B to Denfert-Rochereau (about € 9.10). Next take the metro (line 6 direction Charles de Gaulle-Etoile) as far as the Pasteur station - Journey time* : allow 1h30 (RER).

Roissybus: This bus goes from the airport to rue Scribe, near Place de l’Opéra.
Tickets are on sale at line terminuses, in the airports and Roissybus buses. Fare (information only): € 10.00 - Journey time: 45 to 60 minutes.

Paris has several SNCF (railway) stations. Below are the routes which take you to the Institut Pasteur from the main stations.

Montparnasse station:
This is the closest station to the Institut Pasteur. You can either walk about 15 minutes or take the metro (line number 6 direction Charles de Gaulle - Etoile) to take you from Montparnasse-Bienvenue station to Pasteur station (one stop).