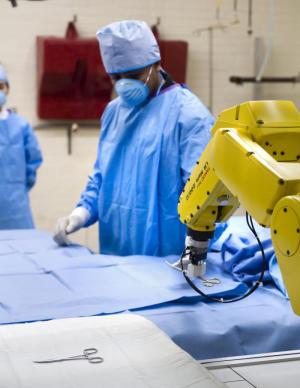 EU-funded researchers from Germany, Italy, Israel and the UK have achieved a breakthrough development in robotic neurosurgery. The ROBOCAST project, has developed a new type of robot that gives two important advantages to surgeons: 13 degrees (types) of movement, compared to the four available to human hands during minimally invasive surgery, and "haptic feedback" the physical cues which allow surgeons to assess tissue and perceive the amount of force applied during surgery. The robot has performed accurate keyhole neurosurgery on dummies, and when ready for humans, could ease the suffering of millions of Europeans diagnosed with tumours, and conditions such as epilepsy, Parkinson's disease and Tourette syndrome.

In keyhole neurosurgery a probe enters a tiny hole in the skull called a burr hole, and manipulates tissue or collects blood and other fluids. Robots can reduce surgeon’s tremor 10-fold, making them especially useful in protecting the delicate and important brain matter. Until now, robots have not been successfully tested for such sophisticated surgery.

Commission Vice-President for the Digital Agenda Neelie Kroes said: "If any activity requires precision, it's neurosurgery, so I am delighted this EU-funded research is helping surgeons and patients to be safer. If we can cut waiting lists and deliver better results for patients as Europe's population ages, I think EU-funded technology projects like this will pay us back many times over.”

A follow-up project, called ACTIVE, is beginning parallel research into robotic neurosurgery for patients who are to remain awake during surgery. Up to three robots (two equipped with sensors and end-effectors to operate and one to actively smooth head movements) are expected to cooperate and assist the surgeon to perform the operation.

Research in Information and Communication Technologies (ICTs) on medicine is strongly supported by the Digital Agenda for Europe which aims at easing the difficulties of illness and supporting active and healthy ageing (see IP/10/581, MEMO/10/199 and MEMO/10/200).


EU-funded researchers from Germany, Italy, Israel and the UK have achieved a breakthrough development in robotic neurosurgery. The ROBOCAST project, has d

Varian has announced that its stockholders have voted to approve the... 117567Read more