Share
Download Article Back
An overview of the successful collaboration between Centre Hospitalier Emile Mayrisch (CHEM) and Agfa HealthCare and the implementation of the Enterprise Imaging platform.

The Centre Hospitalier Emile Mayrisch (CHEM) is the biggest hospital in the southern region of the Grand Duchy of Luxembourg. 1861 staff and 258 doctors work across three sites to care for 100,000 patients per year. But from an information technology perspective, it is a single hospital.

CHEM has been using Agfa HealthCare’s RIS/PACS solution for 25 years. As Roland Kuffer, CIO, describes, “we were one of the first! And we have collaborated with Agfa HealthCare all these years, working together to always push the envelope further. As part of this, over time, we became increasingly convinced of the advantages of transitioning from the dual RIS/PACS solution to a unified Enterprise Imaging platform. Any functionalities we implement at one site, should be available at all three sites, directly and seamlessly.”

The final decision to transform to Enterprise Imaging came after a very thorough workflow analysis from order placement, scheduling, RIS functionality to embedded result distribution in the EHR.

“We had to be sure that all of the workflow elements, functionalities and interfaces between the different systems could be replaced by the Enterprise Imaging platform. Once we knew we would not lose any of this, we very quickly made the final determination to make the change,” describes Mike Moes, PACS Manager at CHEM.

The contract was signed at the very end of December 2019, and installation of Enterprise Imaging began in March 2020. “Of course, this timing created some unexpected challenges, but no project goes entirely as expected, so flexibility between stakeholders is critical,” describes Mr. Kuffer.

A Single Workstation For Each Persona

The benefits of the unified solution were quickly felt at every level: from doctors and technicians, to administrative staff, to IT and PACS administrators, explains Mr. Kuffer. “Each different type of user, or ‘persona’, has their own, dedicated desktop. To give an example of how this makes a difference, with a RIS/PACS, the technicians get the worklist from the RIS, but they cannot see the patient’s previous exams there: that requires the PACS. With our Enterprise Imaging, both the worklist and access to previous images are provided from the same platform, on one workstation.”

Secretaries also have a dedicated desktop with their worklist, which was previously in the RIS, but is now on the consolidated enterprise solution.

For the doctors, Enterprise Imaging has also resolved the inefficiencies and difficulties of the RIS/PACS dichotomy. Mr. Kuffer points out that, increasingly, the clinicians’ requests for imaging must be validated by a radiologist. “This is quite difficult to streamline in a traditional RIS/PACS set-up: the doctor must do one action in the RIS, and another in the PACS.

But with Enterprise Imaging it is very easy: the radiologist can validate the request and transform it into an order on a single workstation, even for more complex exams such as those using ionising radiation. You can define a different workflow for every type of exam, if you want. One radiologist can validate the exam request, another can interpret it. Enterprise Imaging is very flexible with workflows: any set-up you want is possible.”

Another important advantage is that administration is simplified for the PACS administrator, thanks to the single console for handling interfaces, troubleshooting, managing the system setup, and more.

To further enhance the efficiency of the workflows and extend this advantage to the clinicians, CHEM decided to integrate the Agfa HealthCare XERO universal viewer deeply into the EHR, giving greater relevance to imaging information by placing it in the context of the patient’s record.

“Often, the XERO viewer is integrated in the EHR at the patient level, but we wanted to push things further. By integrating it at the exam level, our clinicians can now open the relevant exam in the viewer, with just one click access directly from the EHR. This decision required a bit more work during the implementation of Enterprise Imaging, but will offer long-term benefits,” describes Mr. Kuffer. 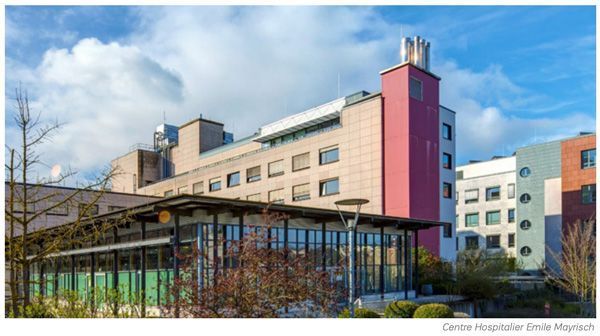 A Consolidated Platform That Reduces Total Cost of Operation (TCO)

In parallel to the benefits felt by the users, other advantages are more strongly experienced ‘behind the scenes’. “Having a single platform that consolidates servers, interfaces and systems simplifies installation and maintenance, saving the IT team a tremendous amount of time and effort,” explains Mr. Kuffer. “With the RIS/PACS, just installing one workstation required configuration with the RIS, the PACS, the Speech functionality – that last one could take hours! And whenever there was a problem, we had to determine if it came from the RIS, PACS, etc. So there were a lot of analyses to do.

With Enterprise Imaging, installing software or setting up a new workstation is much easier. And with a single overview, we can quickly determine the cause of the problem and fix the configuration. So even though there are more servers now, we can see everything on a single desktop; it’s much more manageable.”

As Mr. Kuffer describes, with Enterprise Imaging, no broker is needed between the RIS and PACS, so from three systems, they have moved to one. “That means one installation, one client, one configuration – the advantages are undeniable!”

The advantages of Enterprise Imaging reach far beyond the radiology department. “With Enterprise Imaging, the PACS is no longer an isolated island; instead, it is in the centre of the village, supporting our clinical pathways. For a wide range of the specific patient cases a set of different actions for lab, medication, care and radiology are predefined. Radiology plays an important part in the smooth workflow of the care path. ”

He continues, “Furthermore, like many hospitals, we use a third-party endoscopy modality, and the relevant data is kept in an endoscopy documentation system. With Enterprise Imaging, all of the data and reports are available in one platform, which means that the clinicians can view both conventional radiography and gastrocolic images using XERO. In the same way, they can access ECGs, for instance. This fits with our vision of integrating the imaging data from all image-creating departments across the hospital into Enterprise Imaging, and making it available to our care professionals through the patient record.”

Using the unified platform has also enabled the hospital to standardise its use of the Business Intelligence tools. “We were already using Business Intelligence in our previous system to monitor the performance of the departments. However, there were a variety of individual analyses being made ad hoc.

With Enterprise Imaging, everyone can go through the same interface, which enhances control and cohesion, making it easier to optimise our processes and take informed decisions on, for example, investments,” he describes.

With Enterprise Imaging, we finally have a truly single,
unified system. This is the logical step hospitals have been waiting for

Close Collaboration Between Imaging, IT and Agfa HealthCare

“There are two particularities about our project that I believe played a big role in enabling it to move as smoothly as it did, despite the global COVID-19 pandemic. Firstly, is our very strong implementation team within CHEM. The other is the close partnership we have with Agfa HealthCare.

At the hospital, the PACS team is fully integrated in both the imaging and the IT worlds, forming a bridge between the two. “Mike and Mohamed’s knowledge of both sides of the equation enabled us to jump over several hurdles, and to make certain decisions during implementation more quickly,” says Mr. Kuffer.

“I’m very proud of my entire team, including those responsible for interoperability, and those who installed and configured the PCs. The migration was a joint effort that required careful and correct planning. There were a lot of interfaces with the PACS that disappeared from one moment to the next, so close coordination between imaging and IT was critical to maintain normal hospital functioning without disruption.”

“The COVID crisis impacted – at the last minute! – our implementation planning, especially as the Agfa HealthCare team could not come to the hospital. However, they remained directly accessible to us; whenever we had a question or problem, we could contact our technical support team. That was critical to the success of the project,” describes Mohamed Reguieg, PACS Manager for CHEM.

While Mr. Kuffer considers Enterprise Imaging the ‘logical’ step for hospitals, he sees it as even more: an opportunity to disrupt processes and evolve into a next-generation healthcare provider.

“When you have been working with one system for 20 years, and you have the chance to use something new, it’s a big step. You have to take the time to question and re-evaluate your processes. Don’t just try to adapt the new solution into what you have been doing: explore what you can do more with the new system, evaluate the possibilities, and adapt your workflow to that. The world has changed, and your processes shouldn’t be the same as 20 years ago.”

“Of course, change management in the organisation is important: it isn’t easy to turn your back on those 20 years of familiar processes! To facilitate the change, we set up a steering committee that met every week, and as I said before, having PACS managers with one foot in radiology and one in IT was a big help. But in general, I find that once people have time to get used to the new system and way of working, they never want to go back to the old way. So dare to change!”

Disclosure of conflict of interest: Point-of-View articles are the sole opinion of the author(s) and they are part of the HealthManagement.org Corporate Engagement or Educational Community Programme.