Share
Download PDF
Postmenopausal women are at a higher risk of heart disease due to a certain type of heart fat that collects around the organ, according to a new study by the University of Pittsburgh Graduate School of Public Health.
The study revealed that higher levels of paracardial fat is strongly associated with heart risk in women after menopause and those with lower levels of estrogen at midlife. A higher volume of epicardial fat was also discovered but was tied to other risk factors, such as obesity. 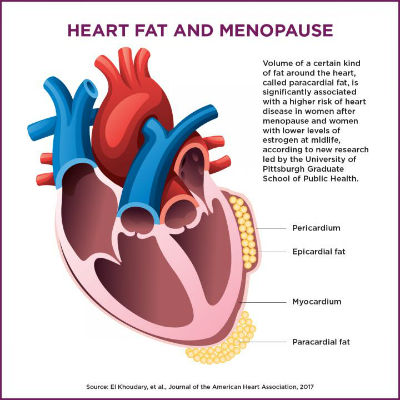 Source: RICK SCIULLO/UPMC
Blood samples and heart CT scans were evaluated on women from Pittsburgh and Chicago enrolled in the Study of Women's Health Across the Nation (SWAN). The 478 women studied were averaged at 51 years old, were at different stages of their menopause and were not on hormone replacement therapy.
A previous study showed that the increase of paracardial fat after menopause is linked to a decline in the sex hormone, estradiol. The latest study found that the high volume of this particular type of fat is tied to a greater risk of coronary artery calcification – an early sign of heart disease.
A 60% increase of paracardial fat was found in the postmenopausal women assessed, which is subsequently associated with a 160 percent higher risk of coronary artery calcification compared to women who have not yet reached menopause or are in the early stages of it.
These eye-opening findings led to a discovery of strategies that can help reduce heart disease risk. Heart fat volumes can apparently be decreased by dieting and bariatric surgery. The impact of hormone replacement therapy in improving cardiovascular health will also be further looked into.
Angela Stephanou
Senior Editor
Source: University of Pittsburgh Graduate School of Public Health
Reference: Khoudary SRE et al. (2017) Postmenopausal Women With Greater Paracardial Fat Have More Coronary Artery Calcification Than Premenopausal Women: The Study of Women's Health Across the Nation (SWAN) Cardiovascular Fat Ancillary Study. J Am Heart Assoc, 6: e004545.
Image Credit: Pixabay

«« Cardiac Rehabilitation: The Missing Link to Close Chain of Survival?

Are we underestimating the risks of statins?

According to a new study published in the Annals of Internal Medicine, the 10-year risk thresholds that are used in guidelines... Read more